I am a huge fan of truth in advertising.  Tell me what you’ve got . . . really.  Don’t say you’re offering “luxury living,” for example, when you’re building apartments next to a gas station and a “gentlemen’s club.” 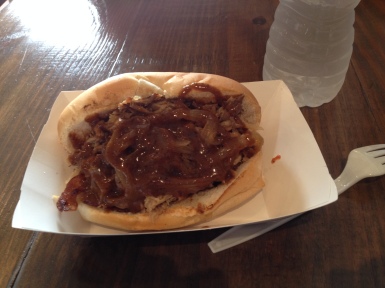 So when Kish and I went to Dinin’ Hall today and I saw Kenny’s Meat Wagon, I was definitely hoping for some truth in advertising.  A meat wagon should either be a hearse or a culinary conveyance that offers lots and lots of savory, hearty, dripping on your chin protein.  I’m happy to report that Kenny’s Meat Wagon fell into the latter category — and how!

Kenny was behind the grill, so I asked him whether I should get the brisket special or the Porker.  He mentally flipped a coin and suggested the Porker.  It was an inspired choice — a roll stuffed to the gills with moist, succulent, piping hot pulled pork, topped with Carolina barbecue sauce, grilled onions and bacon.  That’s right . . . bacon.  No wonder it’s called the Porker.  I silently thanked the tasty swine that gave its all so that I could enjoy this fantastic sandwich.

Bab’s Down Home Cookin’ also was at Dinin’ Hall today.  Kish got the gumbo, and Bab’s graciously offered a side.  I prevailed on Kish to get the homemade macaroni and cheese, because it is the perfect complement to a pork feast.  It was excellent, buttery soft, cheesy, and hot.  My lunch consisted of alternating bites of the Porker and forkfuls of mac and cheese with a swig of water every now and then.  Kish swears I didn’t take a breath during the meal, which seemed to end much too soon.

3 thoughts on “Thankful For The Porker”