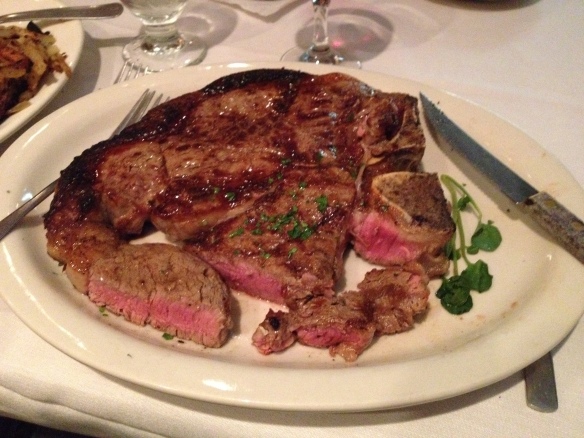 When I have the pleasure of going to a fine steakhouse — and the legendary Diamond Grille in Akron certainly falls into that category — I’ve got to get the Porterhouse.  Why?  Because Porter, whoever he was, would have wanted it that way.

The Porterhouse is a serious cut of steak.  It’s got the tenderloin and the strip steak, so it’s the best of both worlds.  It’s like a T-bone, only a lot bigger.  It’s a steak that, as the photo above indicates, covers an entire dinner plate.  Bring your appetite, baby!

Tonight I had my Porterhouse medium rare, and it was fantastic.  At the Diamond Grille, the Porterhouse is not to be missed.

I’m in Akron tonight for a memorial service tomorrow for Aunt Bebe.  It’s a sad occasion that brings me and other members of the Webner family here, but it’s also nice to be back in the city of my birth.

When I was young, everyone on both sides of my family, grandparents, uncles, aunts, and cousins, Webners and Neals alike, lived in Akron.  It was the center of my little-boy universe.  My first memories are of this place.  It’s where UJ and I first walked to school and where the kids in our family played silly childhood games.  It’s where I learned how to bowl, and made my first friends, and acquired my lifelong allegiance to Cleveland sports teams.

Although we moved away more than 40 years ago and the number of family members who live here keeps dropping, I still feel a very strong connection to this city.  Childhood memories are powerful and lasting, and it takes only a drive past a landmark — like the Summit Mall in Fairlawn — to awaken them and bring them surging back.  I’ll be thinking about old times a lot over the next few days.

Reporters always keep an eye out for scandal, particularly if it involves politicians and strippers.  The latest public figure to be put under the spotlight is Newark Mayor Cory Booker, who is running for the U.S. Senate seat in New Jersey.

Booker’s tale seems more stupid than scandalous.  He had a private exchange with one of his Twitter “followers” — a stripper named Lynsie Lee who works at a Portland, Oregon establishment that touts itself as the world’s first vegan strip club.  (The concept of a “vegan strip club” is curious, because it suggests that patrons actually might choose among strip clubs based upon the cuisine they serve, but that’s neither here nor there.)  The exchange began when Booker posted that he wanted to be president of New Jersey’s Star Trek club, and Lee publicly tweeted in response, “if you’re ever POTUS I call dibs on First Lady.”   Booker then sent a private message to Lee that said “And The East Coast loves you and by the East Coast, I mean me,” to which Lee replied, “Well now I’m blushing.”  The exchange ended with Booker responding, “It’s only fair.”

Pretty silly and sophomoric stuff, but scandalous?  Hardly.  Booker showed questionable judgment in having a private exchange with a stranger, but he didn’t pull a Weiner and send inappropriate texts and photos or otherwise press the social media envelope.

Contrast Booker’s story with that of Wilbur Mills, a Democratic Congressman who was the chairman of the powerful House Ways and Means Committee.  In 1974 Mills’ car was stopped for speeding in the early morning hours near the Tidal Basin in Washington, D.C.  Mills’ nose was bleeding, his face was scratched, and he was intoxicated.  An inebriated woman leaped from the car and waded into the Tidal Basin, where she had to be rescued by police.  She was a stripper who danced under the name of Fanne Foxx, the Argentine Firecracker.  (f you want to get a sense of how a serious newspaper used to cover such events, read the Washington Post‘s contemporaneous coverage of the incident and Mills’ hilarious attempts to explain what happened, available here.)

A powerful politician, alcohol, blood, police, and a stripper jumping into water near the Jefferson Memorial.  Now that’s a scandal!  Compared to the tale of Wilbur Mills and Fanne Foxx, Cory Booker’s Twitter exchange is thin gruel, indeed.