On our visit to downtown Detroit over the weekend, Russell made sure that we stopped by the Guardian Building, which has to be one of the coolest buildings you’d find anywhere.  It is a fantastic palace of a building that combines Incan themes, Art Deco motifs, and the kind of architectural flourishes that you’d expect from a wealthy Bavarian prince.  Walking through the building is a feast for the senses — as I hope the photos in this post demonstrate.

Of course, Detroit being Detroit, reality had to intrude into the dream.  Some time ago, somebody thought it would be wise to connect this fabulous structure to the boring high-rise across the street through what looks like a cheap aluminum tube.  It’s hideous, and it tells you a lot about the kind of judgment Detroiters were using during the city’s long downhill slide.  Fortunately, nobody messed with the lobby area of the building, where these photos were taken. 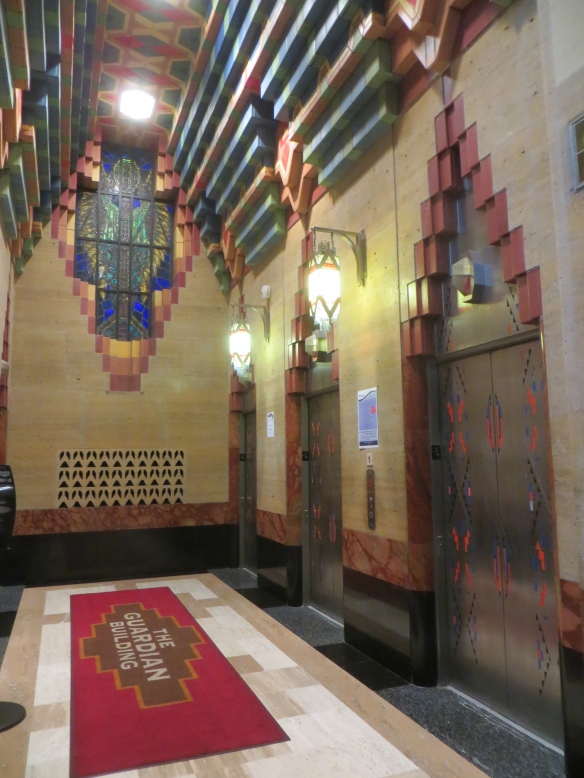 Next week the 2013-2014 Ohio State basketball team will play an exhibition game, and then the new season will begin.  It will be a bittersweet occasion for fans.  We’ll be happy that college basketball has returned to Columbus, but we’ll also feel a certain wistfulness because Aaron Craft — and his reliable back court mate, Lenzelle Smith, Jr. — will be playing their last seasons for the Buckeyes.

Aaron Craft is one of those college basketball players who come along once in a generation.  In an era where many players spend only one, two, or three seasons in the college game, Craft will play four full years as a Buckeye.  He made an impact as a ball-hawking freshman, and his legendary defensive skills have only grown and sharpened with experience.  He’s the kind of player that drives fans of opposing teams crazy, because it seems like he’s been here forever, wreaking havoc with Big Ten offenses and shutting down talented players.  His tenure on the Buckeyes also has been marked with tremendous success — Big Ten championships, Sweet Sixteen appearances, and clutch performances.

This year, we’ll hear about how Craft has worked on his offense during the off-season.  Those of us in Buckeye Nation, however, know that the core value of Aaron Craft will never be a silky jump shot even if he develops the greatest shooting stroke this side of Michael Jordan.  No, the essence of Aaron Craft is grit and teamwork, toughness and drive, determination and doggedness.  He’s the apple-cheeked assassin who is willing to play one-on-one defense with the opposing team’s best player and do whatever is necessary to take that player out of his game.  He’s the little guard who will fearlessly attack the basket, driving between the tall timber for a crucial lay-up.  He’s the guy who will slap the floor with his hands, sacrifice his body to take a charge from a big man, and hurl himself out of bounds trying to keep a loose ball in play.  His hustle will be mentioned by every coach and every Dad watching the game with his kids.  And, through it all, he’s been a highly successful student, an academic all-American, a good citizen, and a valued member of the Ohio State University community.