The Ohio State Buckeyes have a bye week this weekend.  Does that mean that the members of Buckeye Nation won’t be watching football?  Hardly!

No, this is the time of year when any team on the outside looking in is watching the scoreboard, hoping the teams just ahead get knocked off.  That’s Ohio State’s situation.  The Buckeyes are undefeated, but they are ranked fourth in the BCS standings behind Alabama, Florida State, and Oregon.  If the Buckeyes hope to make the BCS Championship Game — and of course they do — they need to win out and have two of those teams lose.  The Buckeyes control the former requirement, but they can’t control the latter.  That means that, on every weekend for the rest of the season, Ohio State fans will be rooting for the Buckeyes and Whoever is playing Alabama, Whoever is playing Florida State, and Whoever is playing Oregon, too.

The TV watching season kicks off in earnest tonight, when Stanford matches up against Oregon, and continues on Saturday, when Alabama plays LSU.  These are games where, theoretically at least, the teams ahead of Ohio State could be upset and open the door for Ohio State to move up in the rankings.

I’m mostly concerned with the Buckeyes keeping their focus exclusively on their personal improvement and their next opponent.  Because I’m not playing, however, I’ll gladly do some scoreboard watching and open rooting on behalf of the Men of the Scarlet and Gray.  So . . . c’mon Cardinal!  C’mon Bengal Tigers!

Kasey and I are about the end of our leash.  The morning walks with the old boring guy have gotten so boring that we can’t take it anymore.  We always walk in the same direction.  We always walk on the same path.  We always see the same dogs.  And, he never lets us stop and smell anything, either.  It makes me wish I could walk in my sleep. 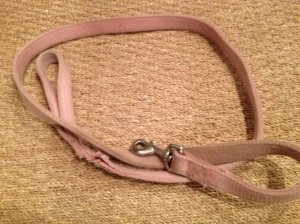 So, Kasey and I have decided to makes things more interesting.  Sometimes, when Kasey is far ahead and I am far behind, I will just stop.  That makes the old boring guy have to stop too.  One time he almost fell down.  Ha ha!  Kasey and I got a good laugh out of that one, even though it made the old boring guy mad.

Other times, when I will stop to answer the call of nature, Kasey will come up and smell my butt.  Why not?  Any dog would do that.  But the old boring guy doesn’t like it and he will yank Kasey away.  When he does that, Kasey walks around his feet until he is totally tangled.  That’s a good one, too!  We keep hoping he will fall down or even step in my poop one of these days.  It hasn’t happened yet, but a dog can dream, can’t she?

Lately my commute to and from work has become more and more difficult.  It’s forcing me to make one of those tough choices that often confront modern Americans — between time and stress.

In days gone by I would leave the house a little before 7 a.m., encounter light traffic on 161, see a moderate increase in traffic as I moved onto I-270 and finally I-670, and then cruise down Third Street.  Absent an accident, I made it downtown in about 25 minutes and almost never had to stop on the freeway.

Those days, sadly, are over.  Even though I leave at the same time, traffic has gotten much worse.  I often hit bumper-to-bumper congestion as soon as I merge onto 161 and routinely have to come to a dead stop on I-270 and I-670 as I inch my way downtown.  It may be the increasing number of people who are living in the northeast part of town, or perhaps it’s a change in traffic patterns brought about by the highway construction that has occurred over the past few years.  Whatever the reason, there are many more cars clogging up my formerly free-wheeling route.

The bad traffic means more stress.  People who are frustrated by the gridlock change lanes abruptly.  Some drivers — always the ones in front of you, of course — make no effort to close up gaps between them and the traffic ahead, so cars cut in constantly.  You’re stuck behind a bus or a semi and can’t see what’s going on down the road.  When traffic comes to a sudden stop, you worry about whether the driver of the car charging up to your rear is paying attention or will plow into you because he’s been checking his Facebook page on his cell phone.

Avoiding this kind of nerve-jangling commute is why I started leaving the house just before 7 a.m. in the first place.  So now I’ve got a new choice — leave 15 minutes earlier and beat the increased traffic, or just endure the increased stress.  Today I’ve decided to sacrifice the time to avoid the stress, but I’m not particularly happy about it.