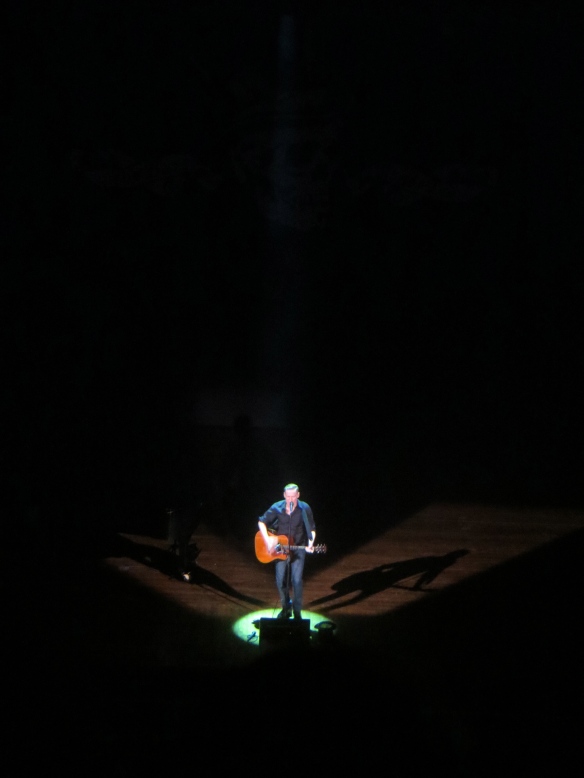 Last night Kish and I put our ’80s on and went to see Bryan Adams at the Ohio Theatre with a group of friends.  We had a great time watching Adams put on a terrific show.

The performance was part of Adams’ Bare Bones Tour, in which he performs with an acoustic guitar, a harmonica, and (sometimes) a piano player — and nothing else.  The goal, he explained, was to reduce his songs to their absolute essence, stripped down and spare.  It was interesting to hear his music reimagined in that way, and although the piano and acoustic guitar put out an impressive amount of sound, what the bare bones approach really accomplished was to allow Adams’ trademark gravelly voice to come to the fore.  And despite the passage of years Adams remains in astonishingly good voice, quite capable of the vocal leaps and flourishes that helped to make the original versions of his songs so special.

Among other selections, Adams played Run to You and Straight from the Heart, Cuts Like a Knife and Summer of ’69, Heaven and This Time, Have You Ever Really Loved a Woman? and I Still Miss You . . . a Little Bit.  Between songs he talked about his music, spoke to members of the audience who seemed very eager to interact with him, picked some fans to fill four seats down front, and invited people from the balcony to come down and dance in the aisles on the first floor.  By the end of the show the area around the stage was a mosh pit of thirty- and forty-somethings, swaying to the music and singing his songs at the top of their lungs.

Last night’s crowd was predominantly female and appeared to include many woman who became Bryan Adams fans as young girls and still love his music.  We were entertained by a group of four women sitting right in front of us who clearly were on a liquor-fueled ladies’ night out.  They sang Adams’ songs with lusty abandon, blurted out unexpected comments, and tried, unsuccessfully, to clap in rhythm to the beat.  They were channeling their inner teenagers and transported back in time by songs that they loved and still touched them deeply.  It was a living testimonial to the enduring power of music.