When the Leader and the old boring guy are away, there’s not much to do.  I’ll check all the windows to make sure there’s nothing going on.  Then I’ll have a drink from my water bowl.  Then I will check on Kasey, but usually she is sleeping under a pile of blankets.  Kasey can sleep all day, but not me.  I am an action dog! 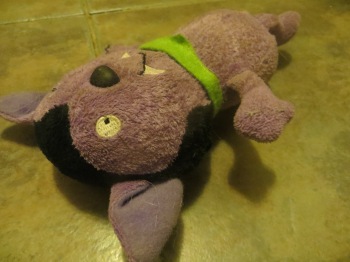 When I get bored, I will go find Little Man to help me pass the time.  Little Man is mine.  He is small and purple and soft, and he keeps me entertained.  I can bite Little Man, and no one yells at me.  I can shake my head and toss him in the air.  I have tried to pull off his legs and arms, but no luck so far.  That just means I’ll need to keep trying.

During the month of November, participants begin with clean-shaven faces, then grow and groom their moustaches as the weeks pass.  Their faces become a visible invitation to discuss the Movember concept, they solicit contributions to support men’s health charities, and they endure inevitable ribbing about the quality and bushiness of their facial hair efforts.  In 2012 Movember raised $21.0 million, more than 80 percent of which went to men’s health charities. Movember is not a huge charitable effort — by comparison, the Komen Race for the Cure raises hundreds of millions for breast cancer research and prevention activities — but any attempt to increase awareness of men’s health issues has got to be a good thing, right?

Not so fast!  A recent article in the New Statesman criticizes Movember as “divisive and gender normative,” “racist,” and more about promoting facial hair fetishes than affecting men’s health.  It is “divisive and gender normative,” the article argues, because only men can grow facial hair, because some men (such as those who are trans-gendered) struggle to grow facial hair, because the growth of body hair in women is socially repressed, and because it equates facial hair with being a “real man.”  Movember is purportedly “racist” because it “reinforces the ‘othering’ of ‘foreigners’ by the generally clean-shaven, white majority,” harkens back to the carefully tended moustaches of British imperialists, and supports the conclusion that “there are different rules for white faces.”  Finally, the article contends that Movember isn’t really about men’s health, but rather about making silly comments and having silly parties, because most people who participate don’t report increased awareness of health issues.

The New Statesman article could easily be a parody of the now-prevailing view in some quarters that any male-oriented activity is, by default, racist and sexist and every other “ist” in the book.  What kind of fevered imagination would conclude that efforts by guys to grow moustaches in 2013 to promote men’s health is, in reality, a thinly veiled manifestation of British imperial tendencies, or a slap in the face to men who wear facial hair for religious or cultural reasons?  We’re at the point in our politically correct world where NFL games are awash in pink to show sensitivity to breast cancer issues.  Can’t a guy grow a moustache for a good cause without being vilified as a latent bigot, chauvinist, and xenophobe?