Today we celebrated Christmas by taking a long walk up the Champs Elysees, then veering over to the Eiffel Tower. It wasn’t nearly as crowded as it has been during past visits, but the place was still packed — and the vendors still hawked rings of Eiffel Tower figurines, large and small. If the Eiffel Tower had not been created by Gustave Eiffel way back when, it would have to have been invented by souvenir peddlers.

At Kish’s suggestion we went to the Conciergerie to view a show called Triple Tour. The show features works by modern artists all of which center around the concepts of imprisonment, and it packed a real punch. 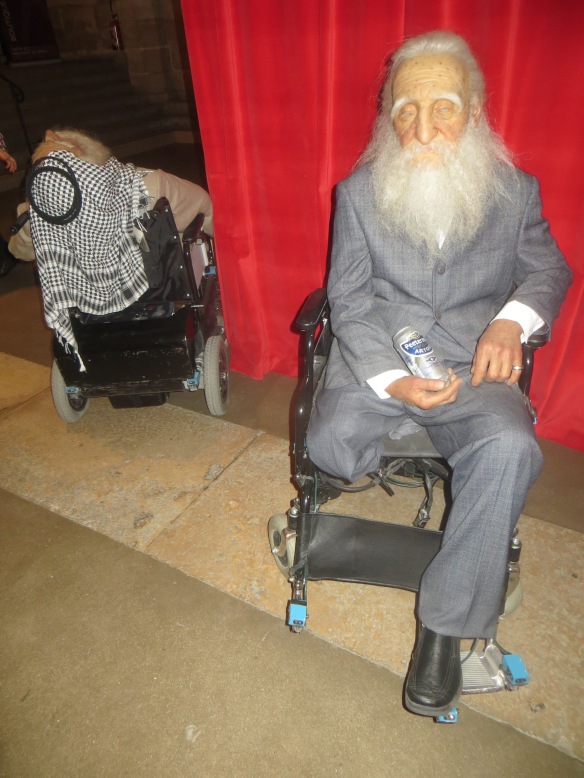 The show powerfully illustrated how “imprisonment” can occur in different ways — by failure to communicate, by aging and physically infirmity, by socialization, and by political systems, among others. All of the pieces were thought-provoking, and some were enormously moving. In my view, among the most potent pieces were a tunnel of video screens created by Bill Viola, all of which displayed different people, eyes closed and gagged, trying to speak; a set of extraordinarily and creepily realistic old men in wheelchairs created by Sun Yuan and Peng Yu, some of which were on autopilot and could sneak up on you, and Boris Mikhailov’s incongruously brightly colored photographs of people in Soviet Russia trying to enjoy normal lives under an oppressive regime.

It was fitting that the show be held in the Conciergerie, a building that housed some of the most notable prisoners during the French Revolution — such as Marie Antoinette. 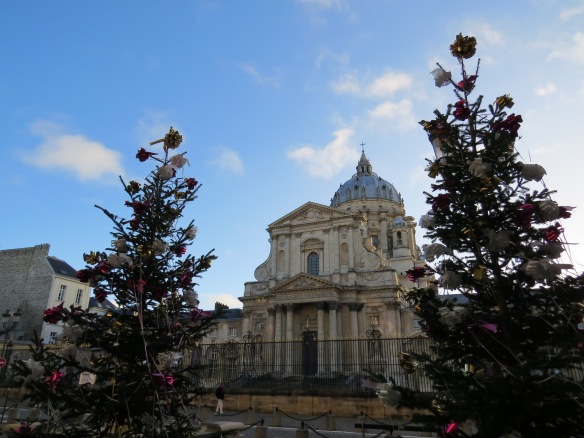 Merry Christmas to all of our friends and family!  We hope the holidays bring peace and happiness to all, and joy in spending time with your loved ones.

After a few days of rain and gray skies, Christmas dawned bright and clear in Paris.  The sun was a welcome sight — although it’s only supposed to be a temporary one — and it lit up the dome of the army hospital museum at the end of our street.  In the square right in front of the museum, the merchants have erected a number of Christmas trees, all of which are decorated with delicate, bright, flowing ribbons.