We passed this sign in front of a restaurant called Cinnamon in the Soho district of London tonight and it made me laugh. But then, I love curry, so I’m not wrong.

The Brits also love their curry. London has many excellent Indian restaurants, and we’re planning on hitting a few during our visit.

Our London apartment is in the Covent Gardens neighborhood, just off the Strand. It’s part of old London, centrally located and within walking distance of just about anywhere you’d want to go. 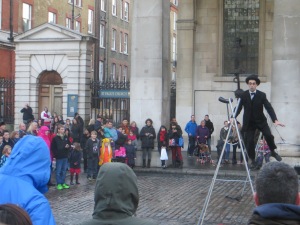 The heart of Covent Gardens is the Covent Gardens Market. At one time it was a large food market; now it’s ringed by high-end shops, with food, antiques, and crafts sold from little stands in the market building. It’s also a place where you can easily find some talented street performers — be they jugglers, or magicians, or acrobats.

The performers put on their acts in the market building and in the surrounding squares, which form natural open-air theaters. Today Richard and I watched a guy balancing on a board who juggled two knives while also juggling and eating an apple. When his act was completed, we moved a few feet away, where another street performer balanced on a rope while tossing his hat from his foot to his head, then mounted a unicycle, road it back and forth on the rope, and juggled some knives before dismounting. Both performers kept up a snappy patter with some vintage jokes, involved members of the audience in their shows, and made heartfelt pleas for contributions when the act was ending.

When I woke up this morning and checked out ESPN I was astonished to see that the Cleveland Browns had fired head coach Rob Chudzinski.

Sure, the Browns sucked — and I mean sucked — this year, stumbling and bumbling their way to a 4-12 season and losing their last 7 games. Russell and I didn’t even use our season tickets for the last two home games of the year. The product on the field was so bad it just didn’t merit a day-long drive to Cleveland to watch the Browns flail their way to another infuriating loss.

Still . . . firing the head coach after just one year? I’m not sure that even Vince Lombardi or Paul Brown could have done much with this team, which featured a decent defense that unfortunately broke down at crucial moments and an abysmal offense that had to deal with the cancer that is Brandon Weedon. Nevertheless, when journeyman quarterback Brian Hoyer was at the helm the Browns looked like a competitive NFL team, and Chudzinski showed some riverboat gambler instincts that were a refreshing change from the normal conservatism of the NFL. When Hoyer went down with an injury, however, the season was lost.

I’m now highly skeptical about the merit of the Browns’ front office. When the Browns traded Trent Richardson two games into the season, it seemed clear that management recognized that the team was going nowhere and was planning for next year. So why hold the coach responsible for not winning more games with a crippled offense of castoffs and retreads who couldn’t score points?

Old fans like me remember when the Browns were the most stable organization in the NFL, with knowledgeable people filling every front-office slot and long-term coaches who were allowed to implement their systems. Now the team is a revolving door, both on the field and in management. Whoever the Browns hire to replace Chudzinski will be their fourth head coach in six years. That’s obviously a recipe for disaster.

In my view, the Browns management — from the owner on down — is now on the hot seat. They had better hire a competent head coach who knows what he is doing, conduct a flawless draft, make some high-quality free-agent decisions during the off-season, and put a playoff-caliber team on the field in 2014. The coaching carousel and incompetence has to stop, now. 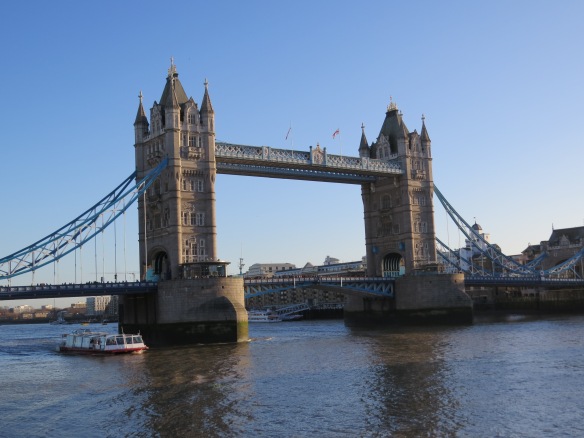 The Tower Bridge is a fabulous bridge. It’s one of those pieces of public architecture that says a great deal about the time and the place in which it was built. The Tower Bridge — built at the end of the 1800s, and featuring all kinds of wholly unnecessary, entirely ornamental spires and turrets and gold-topped embellishments — speaks of an Empire at the height of its commercial and military power.