Last night Kish and I went to dinner with our friend the Bahamian Pilot at Alana’s Food and Wine. It was a chance to rediscover one of Columbus’ really good restaurants.

We’ve been to Alana’s before and had good meals, but it had dropped off our radar screen. Its location — on High Street, just a few blocks north of the OSU campus — is an awkward one for us, because there’s no easy, direct, quick way to get there from New Albany. After last night’s meal, I realize I don’t care if we have to endure a byzantine drive to get to this place. It’s definitely worth the trip. 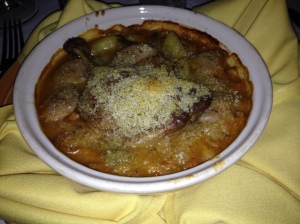 Last night Alana’s was debuting a new menu. We noticed that the appetizer and entree lists both contained the single word “surprise” and a price. We tried to cajole our friendly waiter into spilling the secret, but he wouldn’t. If you wanted to find our what it was, you had to order it — and take a great leap of faith, because you’re really trusting the chef and the breadth of your palate.

I thought it was a cool idea, so I took the plunge and ordered both surprises. It turned out to be an inspired decision. The appetizer was stuffed peppers with a delicate filling and a zingy, gravy-like sauce that demanded to be mopped up with bread and savored. The entree was a big, hearty cassoulet with lots of duck confit, a duck breast that was fall-off-the-bone tender, sausages, and huge lima beans that were both crunchy and infused with meaty flavor. When the waiter revealed that there was a surprise on the dessert menu, too, we had to give it a shot — and we went three for three. It was a kind of thick peanut butter and jelly brownie that went well with a post-dinner cup of coffee.

Alana’s also has a wine menu that features a good selection at reasonable prices and a cool bar area. It’s always on the Columbus top ten restaurant lists — and as I saw last night, its place on those lists should come as no surprise.

2 thoughts on “Surprises At Alana’s”