Get out your calendars, your book bags, and your wallets. The 2014 Ohioana Book Festival is less than a month away. 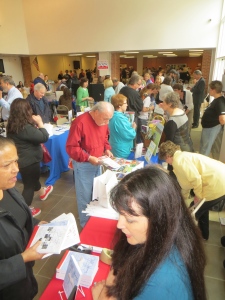 This year’s festival will be held on Saturday, May 10, 2014 at the Fort Hayes Metropolitan Education Center in downtown Columbus. The doors will open at 10 a.m. and close at 4:30, and in between the readers among us will be able to browse through a wide array of books, meet authors, listen to writers talk about their craft, and enjoy an interesting assortment of food trucks when their physical hunger overwhelms their intellectual curiosity. You can keep track of the authors, and the Festival schedule, here.

If you’re interested in volunteering at the Festival, you can information about available positions and activities here. Book festival volunteers will receive a cool Ohioana Book Festival t-shirt, as well as the undying gratitude of Ohioana staffers and Board members.

The other day I drove past Orient, Ohio, the home of the Pickaway Correctional Institution, and I remembered my visit to that facility. It’s the only time I’ve ever been to a prison — and for me that one encounter was more than enough.

It was about 25 years ago, when we were defending a lawsuit brought by a number of siblings. We had to take their depositions, and one of them was in prison at the Orient facility. That meant the deposition would be at the prison. I drew that happy assignment.

I drove down to Orient, which is in a rural county south of Columbus. It’s a basic prison as prisons go, and not one of the maximum security facilities where the most violent and dangerous inmates are housed. Still, there was a lot of security — guard posts and barbed wire fences, going through multiple gates and doors with buzzers and bells and bright lights, showing identification at a series of locations — and I was keenly focused on scrupulously obeying every instruction I received. With the clanging shut of each gate and locked door that I passed through, I felt an oppressive physical and mental impact.

Finally I was inside, in a place where everyone but me, the court reporter, and the other lawyer wore a special outfit. The guards wore their uniforms, and the prisoners wore bright orange jumpsuits. The deposition was in a room off the common eating area, where some prisoners were lingering at tables. We followed a guard to the room, and as we walked through the common area I consciously avoided making eye contact with anyone.

We got to the room, and a guard brought in the deponent. He was a tall young guy, probably around 20, who was in prison for some kind of robbery offense. When the guard escorted him to the room he was handcuffed and wearing the ubiquitous jump suit. I was worried that he would be a glowering, threatening type, but he wasn’t. He answered my questions politely and carefully, without the aggressive attitude I had expected.

When the deposition was over, the guard walked him back to his cell, and the lawyers and court reporter cleared out of there as fast as we could. As I drove through the last gate at the last barbed wire fence, I breathed a sigh of relief. It felt wonderful to be free of that place. I suppose that’s the idea.