Today as I was driving home I heard a snippet of a press conference given by a police chief somewhere in America. He was talking about an investigation he was conducting in coordination with the federal government, and reassured citizens that no stone would be left unturned thanks to their “duplicitous” efforts. Sounds like the kind of devastating admission that could be used to good effect by the lawyers who defend whoever gets arrested as a result of that joint investigation! 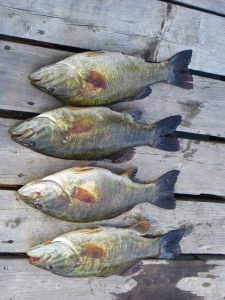 Of course, the police chief should have said “duplicative” — which is probably what he intended — but he botched it. No doubt he wanted to sound highly educated, but instead he gave people who were paying attention a hearty chuckle at a pretty good malapropism.

I received an even better malapropism recently via email. The emailer said he was waiting for something with “baited breath.” I laughed at that one, and thought of all the witty, fish-related responses that his error made possible. Should I say that when he finally got a response he shouldn’t fall for it hook, line and sinker? Add that I hoped he wouldn’t worm his way out of his responsibilities? Observe that if it didn’t work out there were other fish in the sea? Fret about the possibility that the project might hit a snag?

“Baited breath” — as opposed to bated breath — seemed like an especially succulent metaphor because it conjures up the idea of the speaker eating worms, minnows, and maybe even a little chum and tackle. Alas, it turns out that “baited breath” has become so commonplace that linguists think it might soon become the usual form of the phrase. Horrors! Has illiteracy reeled in and ruined another deft phrase that traces its lineage back to Shakespeare himself?