When we last saw Luke Skywalker, Han Solo, and Princess Leia, they were on a forest moon, celebrating the death of the Emperor and the downfall of the Empire, surrounded by happy Ewoks and the ghosts of Yoda, Darth Vader, and Obi Wan Kenobi. 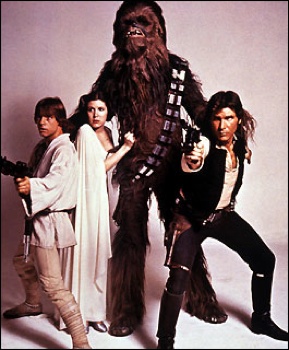 Next year, they’ll be back.  The new installment of Star Wars begins filming in a few weeks, and all of the original cast members, including Harrison Ford, Carrie Fisher and Mark Hamill, as well as the actors who played Chewbacca, R2D2 and C3PO, will be back.  They’ll be joined by some new folks as well as the actor who plays the distasteful boyfriend character on Girls, who apparently will be a villain.  Obviously, the story will take place years after the end of Return of the Jedi.

When George Lucas decided to make The Phantom Menace, he was taking a risk in reinvigorating a beloved and colossally popular movie franchise — but the risk involved in reintroducing the familiar characters from the original Star Wars movies in this latest feature is even greater.  What has happened to Han and Leia?  Did they get married and have kids, or did something happen to keep them apart?  Do any of the characters die?  Whatever happens, people will be second-guessing the story, and the fact that this new film won’t be directed by George Lucas is just going to increase the scrutiny.

I loved the original Star Wars films and fondly remember watching the first movie at the old University Flick theatre next to the Ohio State campus and then going back to see it again and again.  I’m looking forward to being reintroduced to some of the most iconic movie characters of all time, but I’m warning new director J.J. Abrams — handle with care.