For much of its history, psychology has been no big friend of fathers.  The focus was on the importance of the mother, and fathers were lurking there somewhere in the background as one of the many other influences that could shape a person. 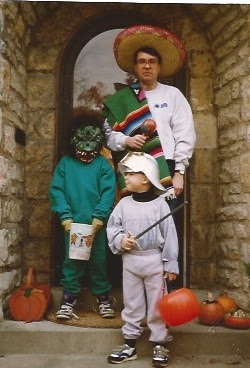 Several decades ago, however, the perception began to change, and psychologists began to reassess the significance of fathers.  Now, research indicates that fathers play a key role in creating an atmosphere of personal security in which children can gain confidence, in helping children to develop through creative and unstructured play — this means running around, making up games, and doing silly stuff, in non-psychologist speak — and in demonstrating, through their involvement, the importance of education and proper adult relations with others in the world at large.  In one recent study, for example, fathers were found to have an even greater impact on child language development than mothers.

It’s kind of weird to think that psychologists ever diminished the role of fathers; it seems obvious that children would be shaped by observing and interacting with the other parent in the household.  It’s interesting, too, that the shift in perception of fathers has occurred as the number of households without fathers has increased, and statistics are showing that the absence of a father as a permanent member of the family can have lasting negative social and economic effects.  Reality finally is trumping early psychological theory.

None of these studies and discoveries come as a surprise, I’m sure, to actual people.  Kids who grew up in traditional households understand the importance and influence (good and bad) of both mothers and fathers.  Every father I know thinks that role is an important one — although they may wonder whether their judgments are sound and wish there was an instructional manual that provided guidance on how to deal with some of the situations that arise.  The bottom line is, we just do the best we can and hope.

1 thought on “The Changing Focus On Fathers”