The Atlantic recently carried a fascinating article on the Lennon-McCartney songwriting team.  It’s hard to imagine that anything new could be written about the Beatles, but the writer’s thesis is that it’s silly to try to figure out whether John Lennon or Paul McCartney wrote most or all of a particular song, because that ignores the impact of the partnership itself and the broader relationship between these two gigantic talents.  They wouldn’t have produced so much good music, the theory goes, if they hadn’t been pushing and challenging and trying to outdo one another.

Sometimes partnerships work, sometimes they can become poisonous.  Creativity comes in all forms:  solitary geniuses, brilliant but self-destructive alcoholics, a sudden burst of novelty that causes an entire artistic community to realize that old boundaries should fall and experimentation and new approaches should replace the calcified prior techniques.  I’m not sure that it’s possible to really draw broad conclusions from a songwriting partnership like Lennon and McCartney.

What most intrigued me about the article, however, was the last part of it, when the writer explains that, according to his producer, Lennon was actively planning on collaborating with McCartney after he finished Double Fantasy.  Of course, the murderous actions of Mark David Chapman prevented that from happening — but what if Chapman hadn’t killed John Lennon?  Could Lennon and McCartney have successfully teamed up again, or would the magic had been gone?

There are lots of similar artistic what-ifs that are tantalizing to consider.  What if Mozart hadn’t died at such an early age and had a composing career that was as long as Haydn’s?  What if Charlie Parker hadn’t become addicted to morphine and heroin and had carried the jazz torch rather than Miles Davis?  What if J.D. Salinger had been as prolific as, say, Stephen King?  What if Vincent Van Gogh hadn’t committed suicide?  We’ll never know.

Here in the Midwest, we’re bracing for the latest round of unpredictable weather.  People have read that a “polar vortex” will be moving through this week, producing unseasonably cool temperatures in Ohio and its neighbors, and there’s been a lot of chatter about it. 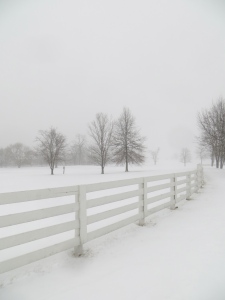 The meteorologists are debating whether the incoming weather conditions really should be called a polar vortex at all — but the average Joe doesn’t care about the scientific mumbo-jumbo.  The fact is, we like having weather phenomena to talk about.  It’s basic, inoffensive stuff that you can talk about with anyone, and since it’s always changing, it’s a constant source of new fodder for conversation.  “Hot enough for ya?”  “That thunderstorm last night was a big one, wasn’t it?”  “This is the snowiest winter in years.”  Sure, it’s boring — but remember, this is the Midwest.

The predicted “polar vortex” (or not) that is headed our way consists of thunderstorms followed by a few days of high temperatures in the low 70s and lows in the low 50s.  Compared to tornadoes and other bad weather conditions, it’s pretty tame.  In fact, it sounds like a delightful break from the normal July menu of blazing days in the 90s and hot, muggy nights.  We’ll probably open our windows and enjoy the cool air.

And then, of course, we’ll all talk about it.