I get the concept of the law of supply and demand, and I’ve always understood that gas prices may vary from region to region.  Having just returned from a long (and very enjoyable) driving trip, I’ve seen first hand the divergence in price — and it sucks.

The photo next to this paragraph, of a gas pump at a stop along I-90 in western New York, was taken on August 9.  Premium, which is what my car requires, was selling for a very hefty $4.16 per gallon.  At that price, it costs more than $60 to fill my tank.

The photo at the bottom of this post was taken today, August 10, at a stop in Ohio just west of the Pennsylvania border.  That was my very next fill-up, and premium was selling for a more modest $3.52 a gallon.  That’s one day later, two states over, about 300 or so miles west — and a difference of 54 cents a gallon.  When you’re filling up a 15-gallon tank, that variance quickly adds up to real money. 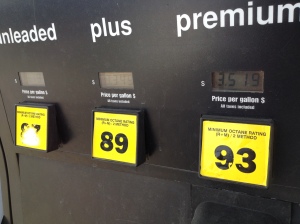 Why the enormous difference?  There’s probably many reasons, but one seems obvious.  The New York fill-up was at a “service area” stop along a toll road.  Infuriatingly, I-90, a major east-west highway, suddenly becomes a toll road when it enters greed-addled New York.  Of course, there’s no competition at a “service area” stop on a toll road.  There’s only one gas option, and you either pay what the station owner charges, or you don’t get get gas.  Inevitably, prices will be higher.  No doubt the proprietor pays the New York State Thruway Association a handsome fee for the privilege of gouging customers who either gas up at a rest stop on the road or have to endure the hassle of exiting the toll road, waiting in line to pay at undermanned toll booths, paying the toll, gassing up, and then going through the whole rigamarole to get back on the road again. In effect, the higher than normal gas prices are a kind of second toll.

Once I got off the toll road and back onto a freeway, without access restrictions, gasoline prices seemed to plummet — and by the time I got back to the Buckeye State, they were much lower.  Is it any wonder that many people consider toll roads a colossal rip-off?