When Kish and I arrived from from our trip yesterday, we had gone eight full days without watching a minute of TV.  Last night we broke the string by checking out the end of the PGA tournament. 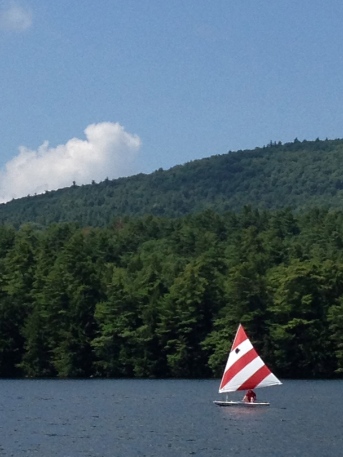 For the first few days of our trip, there was no real TV option to be had.  Our room at the bed and breakfast in Tamworth, New Hampshire didn’t have a TV set, and there wasn’t a TV to be found anywhere on the premises of the Rockywold-Deephaven Family Camp (which is, I think, part of the whole idea of that great facility).  We didn’t feel deprived in either place because our days were filled with walking, swimming, reading, and visiting places we wanted to see.  In fact, not having a TV was kind of liberating — there was one less choice to be made.

The same was true at our stops in the Berkshires and at the Chautauqua Institution grounds, except that I think our rooms in those two places may well have had TVs.  We didn’t really notice because in both places we had lots to do, with more strolling past new places, visiting the spectacular Mass MoCA Museum, and watching Shakespeare and a fine concert and ballet performance.  After days filled with such activities, watching some limp TV show would have been a kind of comedown.

I’ve often thought that TV is a kind of reflexive gap filler; you’ve got a few hours to kill before you go to bed, and watching TV helps to pass that time.  It’s not that TV is an evil force, it’s just that it’s an easy default option — and a mindless one.  Our vacation showed it doesn’t have to be that way.

1 thought on “Emerging From The TV-Free Zone”