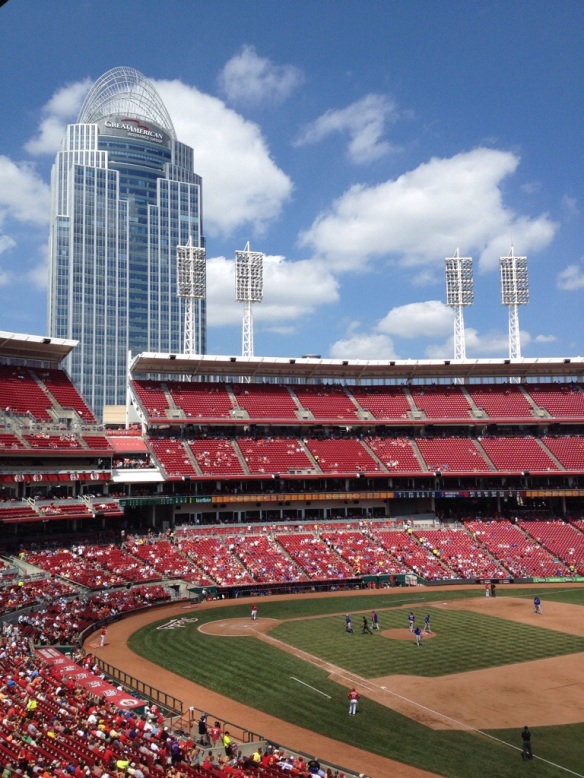 In Cincinnati on a beautiful day to watch the Reds play the Cubs. Great American Ballpark is a terrific venue, with downtown Cincinnati as the backdrop. The Reds have struggled of late, but they’re drubbing the Cubs today.

Going to an afternoon ballgame on a weekday is like an end-of-summer treat.

Burger King has announced that it is buying Tim Horton’s, a Canadian doughnut and coffee chain, and moving its headquarters to Canada as part of the move.  From the frenzied reaction to the decision, you’d think the head guys at Burger King had set fire to the American flag and then used the remains to mop the floor by the deep frying machine.

Ohio’s Democratic Senator, Sherrod Brown, seems to be the one who has gone the deepest off the deep end; he’s urging a boycott of Burger King in favor of American burger outlets like Wendy’s and White Castle.  In an email he sent out yesterday, Brown calls what Burger King is doing “abandoning your country” and says it is part of a “growing trend in which companies get rich in the United States, then move to a foreign tax haven with the stroke of a pen.”  Bernie Sanders, the Independent Senator from Vermont, says the move shows “contempt” for the “average American.”  Dick Durbin, the Democratic Senator from Illinois, also has ripped Burger King for being un-American.

It’s not entirely clear that Burger King’s motive in pursuing the Tim Horton’s deal is to avoid taxes.  The company says they are making the move not to dodge taxes, but because they want to buy Tim Horton’s and think the move will be more palatable to Canadian regulators if the combined company’s headquarters is in Canada.  It seems undeniable, however, that the move to Canada will change how the new company pays taxes — companies that are headquartered in the U.S., under U.S. tax laws, pay the steep 35 percent corporate income tax on all income earned anywhere in the world (even in countries that have no corporate income tax), whereas companies headquartered in Canada (and many other countries) pay the different corporate tax rates in the countries in which the income is earned.

The overreaction to the Burger King move seems like pretty obvious, and silly, political posturing.  So Canada, our friendly neighbor to the north with whom we share a peaceful common border that is thousands of miles long, is now a despicable “tax haven” like, say, the Cayman Islands?  So corporations that see a better deal and pursue it are now unpatriotic if that deal reduces the taxes they pay in the U.S.?

As a reminder to our Senators, corporations don’t exist to funnel as much money as possible to the U.S. government.  Instead, corporations are principally answerable to their stockholders and, in most instances, have the primary goal of making money, not shelling it out unnecessarily.  Burger King isn’t breaking any laws by buying Tim Horton’s and moving its headquarters, and if doing so will help it save on unnecessary tax payments and realize better shareholder value, what’s wrong with that?  If American tax policy is out of step with that of Canada and other countries, maybe America needs to revisit its policy rather than blaming companies for making entirely rational economic decisions.

One other point on this:  there’s a Burger King near my house.  I’m not sure how many people it employs, all told — 50, perhaps? — but how do you think those people would be affected if Sherrod Brown’s call for a boycott were successful?  If Burger King moves to Canada its restaurants will continue to employ thousands of Americans, and it will continue to pay taxes on the money it earns here.  That seems fair to me.