HBO has confirmed two of the four leads for the next season of True Detective.  They are Colin Farrell and Vince Vaughn.

Is this the same True Detective that featured tough, riveting, two-fisted portrayals of Louisiana cops by Matthew McConaughey and Woody Harrelson?  You know, the one that followed two radically different personalities over a number of years and believably depicted how they became close friends while they were trying to track down a terrible, twisted serial killer?

The same True Detective that Kish and I concluded was one of the very best TV shows we’d ever seen, period?

I thought Vince Vaughn only made stupid, cookie-cutter comedies with Owen Wilson that people stopped going to about five years ago.

HBO is pretty good at casting against type.  Maybe Vince Vaughn is tired of portraying an oily, bloated, fast-talker and wants to get into a serious role that allows him to show he can actually act.  I’m not sure it will work, but it’s certainly an intriguing casting choice.

As for Colin Farrell, if he shows the same acting ability he showed in In Bruges, I’ll buy it. 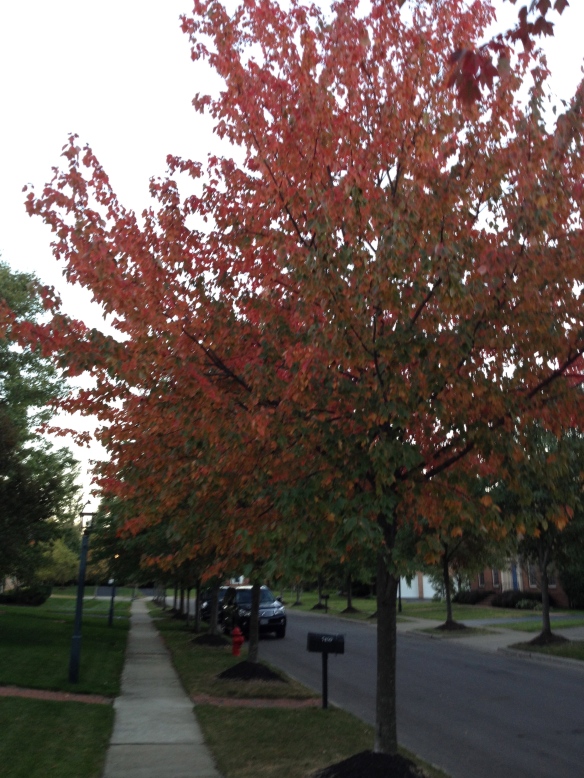 Yikes!  The leaves on the trees on my street are already turning, and it’s not even October yet!  I’m not ready.

Please, weather gods — let us have a few weeks more of Indian summer!  I know it is a politically incorrect term, but it’s been unseasonably cool for months, and we could use some bright, clear days with temperatures in the 80s before the trees show their true colors, the autumn winds blow, and we feel the first breath of winter on our necks.

The news about Ebola in west Africa is dreadful.  A new assessment of the outbreak by the World Health Organization forecasts that the number of people infected and killed by the disease may increase dramatically and become “endemic” in that region — which means that it would never be fully eliminated in countries like Sierra Leone, Guinea, and Liberia.  The WHO also says the death rate for those infected with Ebola is 70 percent.

The Centers for Disease Control and Prevention predicts that the Ebola epidemic may infect 1.4 million people in west Africa by the end of January.  Multiply that number by the 70 percent death rate and you see an enormous human disaster if steps to control the disease don’t work.  Even worse, with each new infected person, there is an increased risk that the devastating disease will break out of west Africa and penetrate into the world at large — and if that happens the forecasted numbers will become astronomical.

And then there is this story from Liberia, which reports that two women killed by Ebola have mysteriously risen from the dead.  The two were about to be buried when they returned to life, causing panic in their communities.  The news report of the incident helpfully notes:  “Since the Ebola outbreak in Nimba County, this is the first incident of dead victims resurrecting.”  The report is silent on whether the two women have since exhibited the signs of undead behavior — like staggering around and munching on the brains of the living — that are familiar to any fans of zombie movies.

Of course, under these circumstances jokes about a zombie apocalypse aren’t very funny.  The zombie story just highlights the fact that west Africa is totally ill-equipped — culturally, medically, and scientifically — to deal with an outbreak of a highly lethal contagious disease.  When you combine superstitious people, the absence of doctors who can reliably diagnose and treat the disease and determine whether its victims are actually dead, an insufficient supply of bodysuits, decontamination supplies, medication, and other necessary supplies, and inadequate sanitation and means of disposing of the bodies of those killed by Ebola, you have created an ideal setting for an uncontrolled epidemic.

A recent New York Times story about one overworked gravedigger in Freetown, Sierra Leone paints a bleak picture and powerfully makes the case that the Ebola outbreak may have reached a terrible tipping point.  We had all better hope that — zombies or not — the efforts to control the disease are effective.