When I graduated from high school in 1975, senior photos were pretty rote.  Guys had laughable and elaborate coiffures and wore loud jackets, girls had hair that was long, straight, and parted in the middle, and that was about it.  The only breakout photo that I remember was of a friend who was a photographer for the yearbook and had his photo taken with his camera cradled in his hand.

In Nebraska, the approach to boring senior class photos is a little bit different these days.

Apparently Nebraska kids want to be photographed with guns.  So one school district had to come up with some rules about whether gun photos would be considered appropriate, and how they might be regulated.  It concluded that gun photos would be permitted if they were “tasteful and appropriate,” didn’t feature students pointing guns at the camera, and also didn’t include an animal in “obvious distress.”

I’m glad they added that last condition to the rule.  Who would want to open their high school yearbook and see poor blasted Bambi or a partially skinned squirrel on the page?  After all, the acne issues and the hair styles are bound to be ugly enough.

We’re about a week from the midterm election.  Can you feel the excitement?  No?

You can tell that Voting Day is drawing near because the Ohio State football games now feature ads for the well-heeled state and local candidates, showing them in old family photos or walking kids to a park for a little swing while the narrator talks about the need for security.  Ohio State games are the most expensive local TV programming on which to run commercials because they always draw a big audience, so the campaigns tend to husband their resources and run the feel-good ads only on the eve of the election. 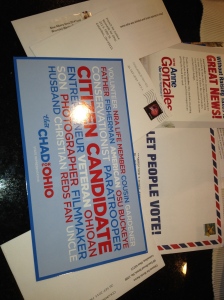 Other signs of the impending election come in our mailboxes, both tangible and electronic.  Most of the mail we get these days is political junk mail, with glossy pictures of candidates and urgent descriptions of their qualifications and positions.  Does anyone, even the loneliest shut-in or the most zealous partisan, actually read this drivel?  In our house, it gets automatically pitched into the recycling bin, and the incessant over-the-top email appeals for money, money, money — “Our opponents have launched a new ad!  Won’t you contribute $10 to help us meet our goal?”  — get the same treatment.

But there is one telltale sign that you won’t see, around here at least:  average citizens actually talking to each other about the election.  Instead, there’s an eerie silence about it.  In Ohio, that’s partially explained by the fact that its a midterm election and because the governor’s race and other statewide contests are uncompetitive, but I think something deeper is at play.  Many people, of all political persuasions, seem to be disgusted and disaffected with the political process and would rather disengage than be disappointed by a perceived champion who turns out to be a bumbling, unprincipled hack.  That’s understandable, but dangerous in a democracy.

On November 4, the polls will open, people will vote, and winners and losers will be determined.  How many Ohioans will even care?