The Columbus Recreation and Parks Department has launched a pretty cool program.  In conjunction with the Keebler Company, they’ve installed tiny doors at the bases of trees in Schiller Park in German Village, Whetstone Park in Clintonville, and Bicentennial Park in downtown Columbus.  One of the doors was designed by an industrial design graduate student at Ohio State. 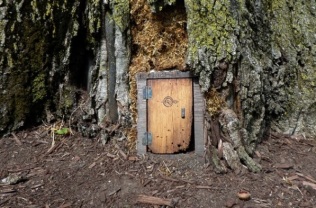 The doors are all different, and they look pretty much like what you would expect an elf’s door to look like — wooden, old, quirky . . . and tiny.  Keebler paid $400 each to four artists who designed the doors and also made a contribution to a Columbus city fund designed to help low-income children.

I’m sure that there are some curmudgeonly types who question why the Columbus Recreation and Parks Department is spending any time doing something like putting tiny doors at the base of trees, when presumably there are other parks and recreation needs to be addressed.  I think the best answer is found in the comments of the happy kids who have seen the little doors.  “This is like a mansion for fairies,” one little boy said.  His friend saw some glittery specks around another door and concluded it must be “fairy dust.”  How can you not relish those comments, and think about how your imagination would have reacted if, as a child, you had found an apparently ancient wooden door at the base of a tree?  If our kids were younger, I think I’d be taking them to these parks to find the little doors for themselves.

We need more wonder and whimsy in the world.  I’m all for adding a few elfin doors.

2 thoughts on “The Magic Of An Elfin Door”