For the whole state of Michigan . . . obviously.

We’ll happily take wins over the Michigan Wolverines every year, from now until the end of time.  Any member of Buckeye Nation who lived through the terrible ’90s will never take The Game against Michigan for granted, nor will we fail to appreciate a victory in the greatest rivalry of them all. 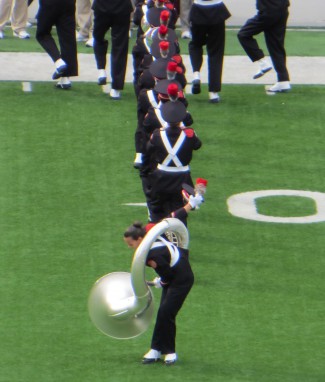 And this year, the fact that the Wolverines fought hard — as any follower of Big Ten football knew they would — and the Buckeyes won the game with Cardale Jones, their third-string quarterback, at the helm, with the clinching touchdown coming on a gutsy fourth-down running play call with Ezekiel Elliott racing to the end zone, just made the win all the sweeter.  42-28 is a pretty good score for a win over your hated rival, particularly when one of their scores comes after The Game was effectively over.

It’s tough that J.T. Barrett got hurt, and I fervently hope that this fine young man is OK.  He has had a terrific season, and it is a shame that he did not get to be on the field to take the knee after the game was on ice.  But his play helped the Buckeyes win The Game, and I hope that he can take some pleasure in that accomplishment.

Now, it’s on to the Big Ten Championship Game.  Let’s hope that this year the Buckeyes get a better result than last year.  For now, though, it’s time to celebrate another win over That Team Up North.  Treasure them, Buckeye Nation!

The sugar cookies are done and ready for icing, the mincemeat cookies are in the oven, the Dutch spice cookies are next in line, and the cranberry hootycreeks are in process.

Baking Christmas cookies is a good way to pass the time waiting for The Game to begin.

When I stepped outside for my walk on this morning of the Ohio State-Michigan game, I immediately thought of my father.

It was because of the weather — crisp and clear, with the stars sharply outlined and the steam from breath rising upward into the chill.  Those are the kind of conditions that would cause my father to lean back, sniff the air, nod approvingly, and say:  “Good football weather.”

Every Midwestern football fan knows exactly what that phrase means.  It means dry conditions, because no one wants to watch football or play football in a downpour.  It means a day that is not too windy and where there is a significant difference between being in the sunshine and being in the shade.  It means a temperature that is cold, but not too cold; in the 30s or 40s, where you can bundle up and layer against the chill and a few hours outside will bring color to everyone’s cheeks.  The kind of day when you enjoy having your core warmed by a well-prepared toddy, or Bloody Mary, or Irish Coffee at a tailgate and can hear the crack of the pads echoing through the stadium as the crowd roars.