One of the main geographic elements of downtown Columbus is changing — and we are starting to see clear visible evidence of the new look.

For years the Scioto River crawled past the downtown area, a muddy brown swath that separated downtown from Franklinton and points west.  The river was so shallow that a replica of the Santa Maria moored next to the federal courthouse could never sail, and branches and other debris routinely became stuck in the river bed, giving the river a sad, derelict look.  It was . . . vaguely embarrassing.  Other cities have lakes and mountains and mighty rivers with boat and barge traffic, and Columbus had a glorified culvert. 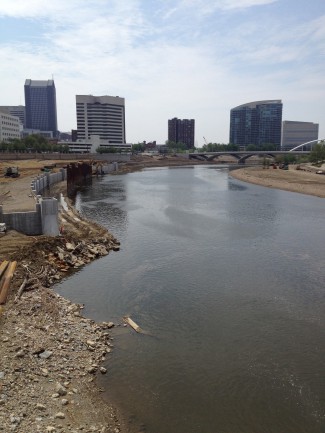 Now all of that is changing.  The Scioto Greenways project aims to rechannel the river and create new parkland downtown as part of the project.  A dam at Main Street that had long blocked the real current of the river has been removed, allowing the Scioto to return to its narrower, deeper, and swifter natural state.  As a result, land that was covered by sluggish water has been exposed and is being converted to parkland.

Yesterday I hiked over to Franklinton for lunch and crossed the river at Broad Street on the way there and Main Street on the way back to check out the work that is being done.  The new channel has opened up wide bands of space on each side of the river bed that will be turned into green parkland.  On the downtown side, a promontory point is under construction; on the Franklinton side, legions of trees stand ready to be replanted.  What’s more, the river itself actually has a noticeable current, and the new river channel has a more pronounced, and attractive, bend as it passes the downtown area.

It’s a positive development for a city that is focusing on encouraging more people to move downtown to live, and more parkland next to downtown and a reenergized riverfront area is bound to help.  Of course, there’s also a question to be asked:  why was the Main Street dam built in the first place, and how much money was wasted in building the dam and then fixing the problems it caused because someone made that bad decision?

1 thought on “Rerouting The River”