At one of the beaches on Spain’s sun coast, police have decided to address one of the most irritating activities of our time — beach hogging.

We’ve all seen it.  You go to a beach or a nice pool at a resort and when you get there someone has placed towels on the prime spots or best lounge chairs.  Sometimes they’ve leave something small and easily replaced, like a cheap pair of sunglasses, an almost empty bottle of suntan lotion, or an old canvas bag, to better mark their territory.

The people themselves are not there, and might not be there for hours — but you know if you sat in their pristine chair or moved their empty towel and sat there instead, they would come and act all huffy and offended, as if some inviolable natural law of the universe allowed them to forever lay claim to the spot simply by placing a towel there at 6:30 a.m. even if they don’t come back to actually get some sun until 2 p.m.

The Spanish police are dealing with this unseemly behavior by confiscating the spot-reserving stuff left by the beach hoggers and making them pay a 30 Euro fine if they want to get it back.  And to make sure that everyone has plenty of notice, they are handing out leaflets to tourists to advise everyone of the anti-hogging policy.

This no doubt seems like a small thing, and some will argue that police should be spending their time focusing on more important things like catching thieves.  Of course, no one is arguing that police should ignore such crimes, but policing annoying behavior that unfairly limits the ability of others to enjoy a public space like a beach is important, too.

Hogging behavior is exasperating, and it is spreading from beach and poolside chairs to other parts of our daily lives in public places — where people try to “reserve” the prime seats at a high school graduation ceremony by leaving programs there the night before, or put orange cones on grassy patches of devil’s strip along the parade route, or block off “their” parking spots on a public street.  Such hoggish behavior threatens our social compact.  It’s about time that we followed Spain’s salutary example and stood up to such boorish overreaching and acquisitiveness. 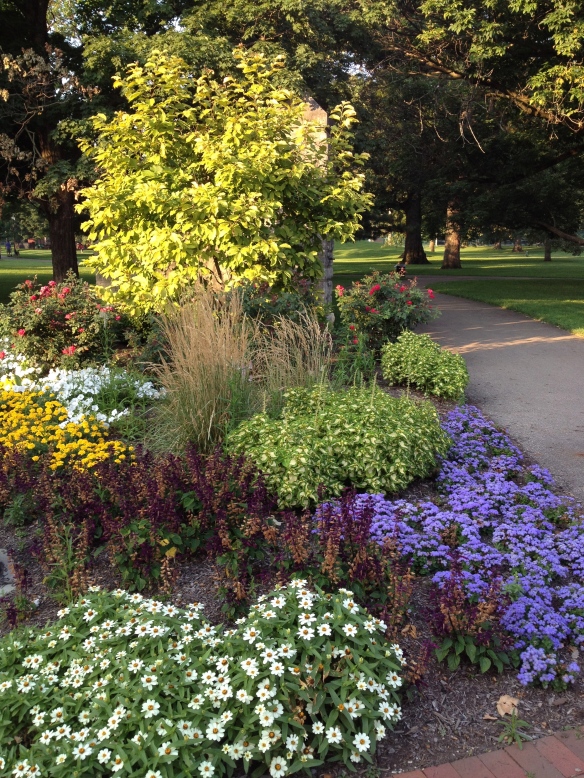 Lately I’ve taken to walking around Schiller Park just after sunrise on our lazy weekend days.  It’s the perfect time to walk around a mature park, with the air still crisp and dewy and cool, the grass bladed with bright green and deep shadow, the world peaceful and calm and brilliantly quiet, and the sunlight slanting in at just the right angle to make everything look sharp and clean and full of possibility.  Such walks make you appreciate that there is much beauty and wonder in the world, and also relish having just a small fraction of it close by and ready to be enjoyed whenever we choose.

The other day I was bitten by a mosquito.  No big deal in the Midwest, but then I realized it was one of the few mosquito bites I’ve gotten this summer — so few, in fact, that getting even one is a notable occasion.

That’s doubly weird, when you think about it, because we all know that mosquitoes thrive in rain — and this summer central Ohio has gotten far more than its fair share of wet weather.  With the repeated, soul-deadening drenchings we’ve endured, week after week, you would think that the Columbus area would be a mosquitoes’ paradise.

According to Orkin the pest control company, however, Columbus is far down the list on the peskiest cities in America — where hot, humid, mosquito-tormented Atlanta leads the way.  And in central Ohio itself, the only area with a mosquito problem significant enough to require spraying is Dublin.  In the north areas of Dublin, traps set this summer caught “abnormally high” numbers of mosquitoes, whereas traps in other parts of the central Ohio area caught substantially fewer of the blood-sucking fiends.

It’s logical, I think, that a more urban setting like German Village would have fewer mosquitoes, simply because there is less standing water and fewer of the desolate, boggy areas that mosquitoes crave.  And Kish and I aren’t going to many of the activities that make people prime targets for Anopheles and Aedes.  I’m convinced, for example, that you get more mosquito ear-buzzings and bites per minute at a kids’ night Little League game than any other venue, and with the boys out of the house we haven’t been to one in years.

Mosquitoes are a traditional part of a central Ohio summer, but they are one that I am happy to do without.