Yesterday Kish and I took a different route home after dropping some books off at the library and were walking down Beck Street when we saw what is always an encouraging sight:  a group of people working together to improve their community.

In this instance, the diverse group of adults and kids had rolled up their sleeves to help the former Beck Street Elementary School prepare for its new role as the Columbus City Schools’ Columbus Gifted Academy, a school for third- to eighth-graders who are identified as having superior cognitive abilities or being advanced in both math and reading.  They had brought wheelbarrows and hoes, shovels and rakes, work gloves and brooms, and were swarming the school grounds, industriously clearing the property of weeds and debris and filling countless lawn bags and trash bags in the process.  There were even people on hands and knees on a brick patio, carefully picking weeds from between the bricks — which is back-breaking labor by anyone’s measure. 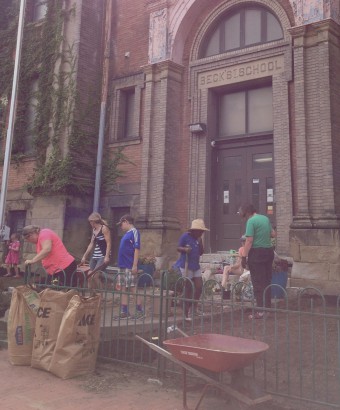 Even though it was a hot afternoon and these folks were working very hard, they were a friendly group who radiated positive vibes.  A nice little girl asked if Kasey would like some of her water, and one of the volunteers stopped to explain what they were doing.  She noted that she wasn’t from the neighborhood but said that she supported the idea of the school for the gifted and hoped that her kids might get into the new school someday.  And I’m guessing that these people felt even better and more positive when they finished and looked with deserved pride at what they had accomplished through their efforts — which was to clear away all of the outward signs of a derelict piece of property, let a beautiful old school building shine, and help to get it ready for its intended use as a learning center for children.

What a pleasure to see ordinary people rolling up their sleeves, taking time from their Sunday, and working as a team on a community project!  My guess is that this group included people of all persuasions, united simply in their belief that individuals can still have a positive public impact through their collective efforts.  It’s the kind of civic-minded effort that helped to make America great, and it’s heartening to see that it is still here.