Yesterday as I was walking to work I noticed some colorful chalk printing on the sidewalk.  At the corner of Broad and Third, just across from the Ohio Statehouse in the center of downtown Columbus, someone had written: “Bernie not Hillary March 15th.” 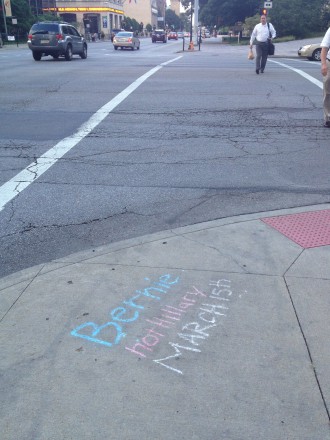 This little bit of street art politics was the first sign of a 2016 campaign I’ve seen in Ohio, from either party — and coming from the cash-strapped, guerilla-level Bernie Sanders campaign you’d expect it to be something like a chalk message — but it gave me a moment’s pause.  March 15?

Turns out that March 15 is the new date of the Ohio presidential primary.  Those of us who are old enough remember when Ohio used to be at the end of the primary cycle, part of an old “Super Tuesday” group of big-state primaries designed to tip the balance in favor of one candidate or another.  But then people realized that candidates never made it to the end because they ran out of money, and the early primaries were the decisive ones that drew the media money and the tax-paying, hotel room-using campaigns.  Since then, Ohio’s primary has become a vagabond, moving around the calendar, trying to find a meaningful role.

Ohio’s primary was last held in June in 1992.  In 1996 the Ohio primary was in the middle of March, then for the last few presidential election cycles, it has been held in the first week of March, as part of a new Super Tuesday grouping.  This year, the primary has been moved back a week — apparently because the national parties have tinkered with their allocation of delegate rules to discourage states from front-loading the process — and some argued that the primary should have been moved even farther back, to May.

By the time I walked home last night a summer rainstorm had washed away the chalk message from the Sanders supporter — and Ohio’s current primary date may prove to be about as temporary, as the Ohio party pols try to thread the needle between maximizing their delegate allocation and attempting to ensure that a big, diverse state like Ohio has some more significant role in the candidate selection process.  In 2016, they hope that magic date is March 15.  In 2020, who knows?