I’ve been on the road a lot lately, with several in-and-out trips to New York City being part of the travel schedule.  New York City is a very cool place — once you get to the City itself.  Unfortunately, the cab ride in from LaGuardia usually bites.  It’s as if New York City planners decided that the best way to prepare someone for the rigors of Manhattan is to toughen them up and lower their expectations by giving them a painful ride into town. 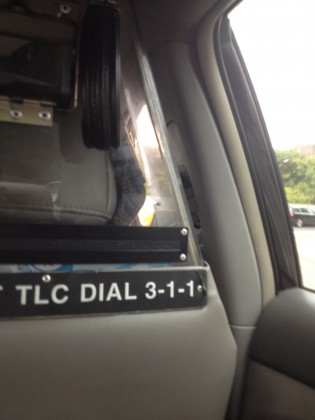 I’m not the sort of person to get car sick, but Sunday night’s ride into Manhattan got me to the verge of spewing all of the old, crappy, duct-taped seats of my cab.  My driver was an angry guy (of course!) who had only two driving modes — maximum acceleration and jamming on the brakes, and he did both, alternatively, while cursing the traffic (which was heavy, of course) and gesturing angrily at the other drivers (who paid him no attention).

As a result, my fellow passenger and I were like those old Weeble toys, constantly rocked back and forth with the speeding and braking, lurching forward and careening backward and slamming into the seat behind.  Occasionally the driver modified his technique by changing lanes abruptly, so that we got that delightful unexpected lateral motion sensation, too.  Add to it all that the weather was hot, the cab had no air-conditioning, and the windows were cracked to lessen the heat factor — which only means that the back seat was filled foul-smelling, exhaust-laden air — and you will believe me when I tell you that, to put it mildly, the ride in to downtown really sucked.

It doesn’t have to be that way, of course.  Our ride from Manhattan to LaGuardia this afternoon was reasonably pleasant, with a smooth, non-jarring ride and no death-defying lane changes or unhinged gestures.  It makes me wonder — once you get a cab license, in NYC, is there ever any random, anonymous testing to see whether you should still be ferrying passengers back and forth through some of the worst traffic conditions in the United States?  And is it any wonder that so many people prefer Uber, where you know something about your driver and how they have been rated by prior passengers?