I’ve been on the road a lot lately, and I’ve encountered some long lines going through the TSA checkpoints.  They suck, frankly.  So I’ve thought about how to deal with the issue in the classic American fashion — by paying more money to avoid the lines.

That’s right:  I’ve decided to go over to the Dark Side of getting TSA PreCheck clearance. 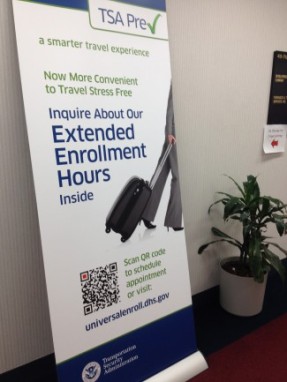 So today, Kish and I stopped in one of those humble, entirely anonymous five-story office buildings that you find among the strip malls — the kind of generic space filled with plastic potted plants that probably is an incredibly depressing place to work — to go through the PreCheck clearance process.  After waiting for a while, we presented our passports, answered a few questions about our lack of felony convictions and general mental health, gave the government our fingerprints, and then paid $85 each for the privilege of avoiding the regular TSA lines and keeping our shoes on and fluids in our bags when we go through security.

In all, the actual interview process took about five minutes.  We’re supposed to get our TSA PreCheck numbers in a few weeks.

Interesting, isn’t it, that we pay the government $85 to collect our fingerprints and allow us to avoid lines that the government security procedures have created?  Nice work if you can get it!  I couldn’t find any information about how many people have coughed up the cash for PreCheck, but I imagine its a good moneymaker for the feds — and if it keeps me from standing forever in lines, listening to TSA personnel shouting at those in the queue to remove their laptops, place them in separate bins, etc., etc., the $85 is worth it.

1 thought on “May The Pre-Check Be With You”