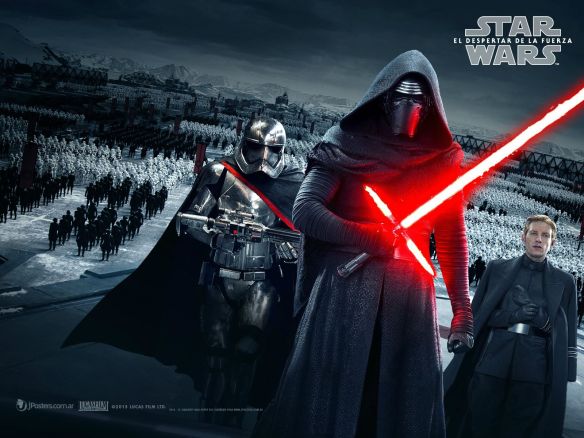 It’s beginning to look a lot like Christmas — but who cares?  I mean, come on!  We’re less than two weeks away from the opening of Star Wars: The Force Awakens, and the geek world is in full Star Wars madness mode.

You could spend hours just surfing the internet for information about the new movie.  To save you at least part of the trouble, here’s a sampling of some of the diverse Star Wars stories out there:  an interesting BBC interview with Harrison Ford and director J.J. Abrams, a story collecting seven of the most far-out fan theories about the plot lines of the movie (Jar Jar Binks a Sith Lord?  Seriously??), and an article positing that a careful review of the Star Wars trading cards that are now being sold reveal crucial story elements.  And, of course, you can go to the official website if you want to watch the trailers a few dozen more times to get ready for the big day.

I’m not much for trying to figure things out before I go to see a much-anticipated movie, so I’m not going to actually read any spoiler reveals or try to guess what might happen to Han, Luke, Leia, and the new generation of Jedi warriors.  I’d rather take my Star Wars pure and unadulterated by anything other than approved previews.  So for now, I’ll count the days until the movie hits the theaters, check out safe stuff like the Spanish language poster printed above, and think:  that movie looks like it is going to be pretty cool.