They’ve done a really nice job on the Columbus Commons holiday decorating this year, with a big tree, large faux holiday lights in the flower beds, and light projections onto the sides of buildings.  And if you stand near the tree and look toward the core downtown area, the performance stage looks somewhat like a fireplace.  When I walked by tonight, the big TV screens to the right and left of the stage were playing footage of a roaring fire, too.

It’s not clear at this point whether the weather gods will cooperate by giving us a white Christmas.  The forecast for this coming weekend predicts temperatures hitting the low 60s. 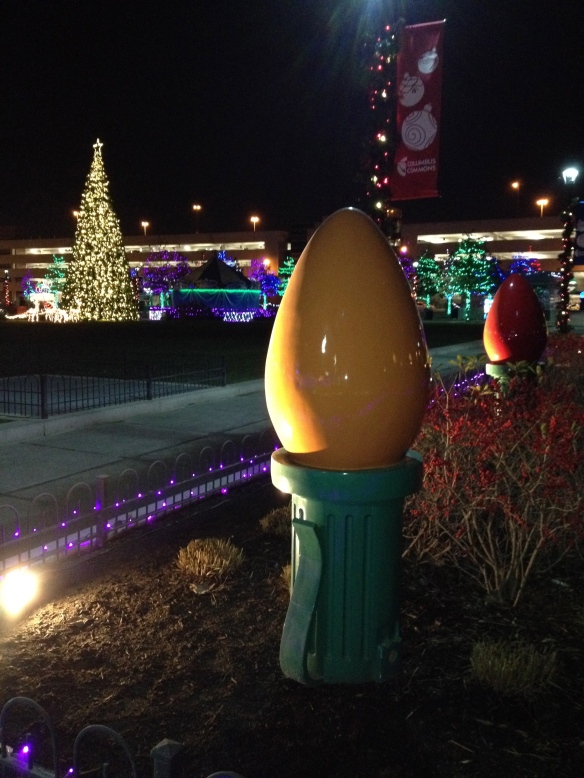 The battle against terrorism, and the question of how to deal with the Syrian refugee crisis, illustrate once again how hard it is to find the common, middle ground in modern America.

A devastating event like the Paris attacks or the San Bernardino shootings occurs, and the respective sides retreat to their corners — which seem to be getting farther away from each other.  The group on one side insists that we should trust the government to deal with the issue, that the real problem isn’t ideology but the availability of guns, and that in any case we should be more focused on homegrown nuts and their violent antics.  In the corner we’ve got — well, people like Donald Trump, who argued yesterday that we should ban all Muslims from entering the United States until the government can “figure out what is going on.”

It seems like there is a lot of middle ground between those positions, yet sometimes it is hard to find it and stake it out.  Social media, the demands of political fundraising and a 24-hour news cycle, and the full-time spin machines of the political parties all contribute to that reality.  Politicians who take hard-line views on either side find it easier to raise money and stay in the news, and politicians who voice more nuanced positions get relentlessly attacked by the hard-liners as soft or unprincipled.  Internet memes talk past each other without fairly characterizing, or engaging, the merits of differing viewpoints.  And the spinners distort opposing views and try to push them as far away as possible from that elusive middle ground.

Of course, all of those tactics and tropes don’t eliminate the middle ground, they just obscure it.  The fair-minded skeptic focused on practical realities can still find it in the murk.

So where is the middle ground here?  I think the middle ground flatly rejects Trump’s call for banning Muslims as appalling demagoguery that is anti-American down to its dark, rotten core, and inconsistent with the foundational principles of tolerance and religious freedom on which our country was built.  I think the middle ground recognizes that radical Islamic terrorism is a dangerous threat to our peace and security that needs to be addressed, that people who worry about it aren’t inevitably nutty racist xenophobes, and that we can’t hug it away or reasonably characterize it as less important than, say, global warming.  I think the middle ground thinks we don’t have to choose whether foreign terrorists are more dangerous than crazed Americans who shoot up schools or theaters or Planned Parenthood clinics, but that a country with our resources should actually be able to deal with both of those problems.  And I think the middle ground understands that reflexively depicting the person who doesn’t agree with you as an idiot, a wuss, or a knuckle-dragging throwback isn’t going to help us tackle these problems and that harsh language and caricatures usually just harden opposing views rather than persuade.

In some way, Donald Trump’s bombastic buffoonery might actually help us to find the middle ground; it’s encouraging that other Republican presidential candidates condemned his proposal to ban Muslims from entering the United States.  But we can’t rely on Trump’s appeal to the lowest common denominator to define the national discourse.  We’ve got to find that middle ground, somewhere, and then move forward.