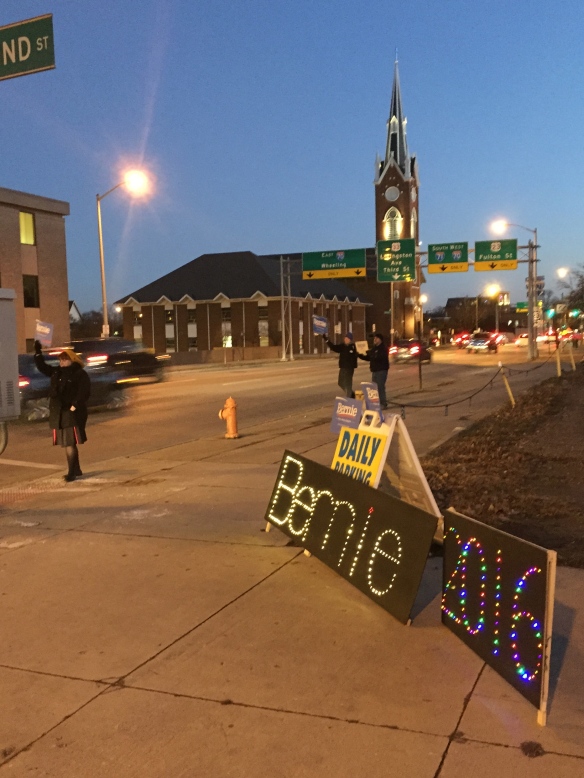 As I walked home tonight, three Bernie Sanders volunteers were out at the corner of Third and Mound, hoping their handmade, glittery, disco sign and waving placards would provoke some honks from the departing downtown Columbus rush hour traffic.  Sure enough, they got a number of horn blasts and a few fist pumps, besides.

As I walked past, one of the volunteers said he was “feeling the Bern.”  He must have been, because the Ohio primary isn’t for a few weeks yet.  What do they think this is — Iowa?

In the most recent Republican presidential debate in Iowa, Ohio Governor John Kasich commented that the path to nomination had an establishment lane, an anti-establishment lane, and the “Kasich lane.”  It was a bold statement from a candidate who is but a blip in the Iowa polls, and Kasich was immediately mocked in some quarters with tweets about the “Kasich lane” that featured vehicles on fire and overturned cars. 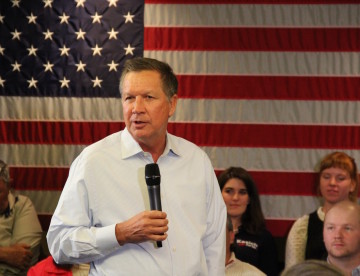 Kasich’s quest for the presidency is a quixotic one, and he’s not been afraid to follow his own, unique approach to trying to win the nomination.  This past weekend, while all of his fellow Republican candidates were in Iowa, the Ohio governor was in New Hampshire, holding still more town hall events.   He’s clearly staking his campaign on a good showing in the Granite State.  And where other Republicans treat the New York Times like an abhorrent, unclean thing, he was happy to get that newspaper’s Republican endorsement — even if the endorsement first castigated the other candidates for the Republican nomination and then described Governor Kasich as “the only plausible choice for Republicans tired of the extremism and inexperience on display in this race.”

During the campaign, Governor Kasich hasn’t been afraid to say things that are, well, different from what you normally hear during Republican primaries, where candidates typically want to present themselves as tough and resolute.  He’s described himself as the “Prince of Light and Hope.”  He admitted recently that, in his hotel room, he thought about the endorsements he has received and cried, because “It’s amazing to come from where I came from and have these wonderful things said about me.”

In the Republican debates, he’s been the guy at one far end of the stage, not getting a lot of air time and giving answers that always seem to refer to his production of a balanced budget when he was chair of the U.S. House of Representatives Budget Committee.  Unlike other candidates, his debate answers seem to be completely unscripted — so much so that some people have joked that when he gets a question, it’s time to take a bathroom break.

It’s impossible to know at this point how Governor Kasich will fare with New Hampshire voters, but you have to give him props for charting, and sticking to, his own course — whether you call it the “Kasich lane” or not.  It’s a pretty unconventional approach to winning the nomination of a party that usually seems to relish the conventional.