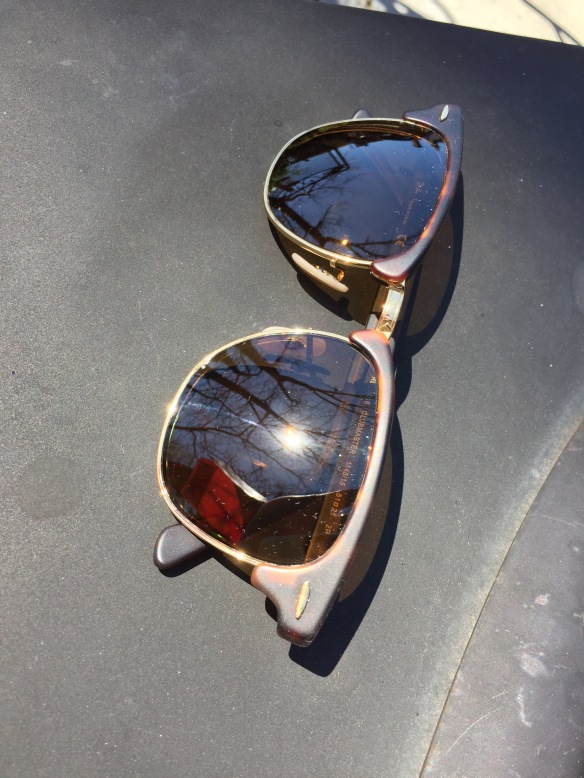 On a brilliantly sunny day like today, only Ray-Bans will do.  ZZ Top was wrong.

Every morning I walk past the Columbus Dispatch building on Third, and every night I see it again as I walk home from work.  I like the news crawl, which gives me a taste of the latest developments in the world, but I especially like the neon sign that sits atop the building.  It’s old school, with its delicate steel girder support structure and olde English script, and it’s been there, I think, since I first came to Columbus in 1971.  Along with the Statehouse, the Ohio Theater and the LeVeque tower, it’s one of the few unchanged staples of the downtown area.

It’s a beautiful day in Columbus.  After weeks of crappy, rainy, even snowy, unseasonably cold weather, spring finally has arrived in earnest and brought some warm weather.

For Ohio State football fans, today marks the semi-official start of spring — and starts the countdown to Buckeye football in the fall — with the playing of the spring game.  The Ohio State team will split in half, with the Scarlet squad vying against the Gray team in Ohio Stadium.  Tens of thousands of people will show up to watch.  Last year, a record 99,391 members of Buckeye Nation made the trip to the Horseshoe to watch the spring game.  Why not?  It’s fun, there’s no pressure in the result, and it’s a way to scratch that need-to-watch-football itch that’s been tormenting OSU fans since the Buckeyes trounced Notre Dame in their bowl game.

The spring game is a kind of glorified scrimmage, but it’s one that is broadcast on national cable TV (tune in at 1:30 on the Big Ten Network!) and this year it’s got an interesting story to it.  A huge number of Buckeye stalwarts of the recent past — Joey Bosa, Ezekiel Elliott, Adolphus Washington, Eli Apple, Michael Thomas, Taylor Decker, and Braxton Miller among them — have moved on to the NFL, so the Buckeyes have a lot of holes to fill.  Here’s a chance to see the newbies don the pads and the uniform and begin to show what they’ve got.  They’ve been working hard for weeks with Urban Meyer and his coaching staff in spring camp,  and now they get to run out onto the turf at the fabled Ohio Stadium venue and soak in the cheers and applause of the Buckeye faithful.

Who’s going to be the next great Ohio State running back?  Who’s going to harass opposing quarterbacks, make the clutch catch in a big game, or make the key block that allows the Men of the Scarlet and Gray to cinch a game?  The Spring Game might provide some answers to those questions — and it also lets you start to work on your tan.