Washington, D.C. is all agog about “Congressman X,” the Democratic member of Congress who has anonymously penned a 65-page book called “The Confessions of Congressman X” about how corrupt, cynical, and phony members of Congress are.  One chapter, for example, is entitled “Harry Reid’s a Pompous Ass.”

Well, of course he is.  In fact, so is every member of Congress.  And, for that matter, so is “Congressman X.”

Here’s what I want to know:  why doesn’t Congressman X confess for the record?  Why doesn’t he have the guts to identify himself and express those opinions for attribution?

In my view, the sad tale of “Congressman X” is the problem, writ large, with our “public servants” right now.  They’re gutless.  They’re so chickenshit, one and all, irrespective of party, that they gladly prostitute themselves for lobbyists and spend all of their time fundraising so they can be returned to the Washington merry-go-round next term.  And when “Congressman X” nears the end of his “service,” he writes an anonymous tell-all book so he can make even more money from his period of “public service.”  It’s tawdry and appalling — but it’s so Washington, D.C.

No one has the fortitude or the principles to stand up and be counted.  And that’s why we have a dysfunctional government in which the legislative branch — which the Founders designed to be the most powerful of the coordinate branches of government — has steadily yielded power to the executive branch and the judiciary, to the point where we now have a federal government that is largely governed by executive decree rather than legislation considered, drafted, and debated by the “people’s representatives.”

So I say that “Congressman X” can bite me.  A pox on his house, and a pox on all of their houses.  Won’t anyone in D.C. stand up and be counted for a change?

In America, the personal savings rate, by household, continues to decline from year to year.  Although the U.S. isn’t dead last in the world, American households lag well behind most developed countries when it comes to salting money away for the future. 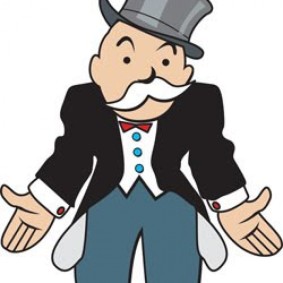 Why?  Why aren’t adult Americans more focused on saving for a rainy day, or having a contingency fund, even a modest one, that they can fall back on if a personal emergency hits?  The savings deficiency is reflected both in the lack of money kept for use if the need arises in everyday life — like a special health care bill or car repair — and the shocking statistics that you read from time to time about how little the average household has saved for retirement.

An interesting Bloomberg article posits that the causes are a combination of keeping up with the Joneses and helicopter parenting.  The article’s headline aptly captures its gist:  “Parents Are Bankrupting Themselves to Look Adequate.”  The concept is that while there are a lot of causes for the non-savings phenomenon — easy credit and more credit, the development of previously unavailable goods and products, like miracle drugs, that cost a lot, and so on — a big one is that parents feel so competitive about things like schools,  activities like expensive camps, or clothes and cars for their kids that they are spending themselves to the brink of oblivion, to the point where even a modest reversal of fortune plunges them over the financial abyss.

Are parents now more focused on getting the best for their kids at all costs than, say, parents of the ’60s and ’70s?  Probably, and for some people it’s likely a combination of competitiveness and irrationality, where parents just aren’t willing to say no to, say, putting their kid on a sports travel team that requires the whole family to travel to some faraway spot virtually every weekend and stay in a hotel while the kid is involved in contests.   I could be wrong, but I can’t imagine my parents doing that.

In my view, though, the big underlying difference between this generation and those that have gone before is personal experience.  My parents lived through the Great Depression as children and saw what is was like.  They knew that disaster could strike and that the best way to prepare for that possibility was to save.  I got that understanding from my parents and grandparents, for whom the Depression was always a very real thing.  If you’ve never really experienced adversity, and aren’t thinking it’s really a plausible scenario, then you might well borrow to the hilt to buy fancy cars for your kids or to finance a high-end school, expecting that things will somehow work out.  And although the Great Recession had some impact on this seemingly pervasive sense that everything will be OK, and caused a little upward blip in savings, its impact has dissipated and the savings rate has dropped back to incredibly low levels.

Sometimes, bad things do happen.  If you don’t have some savings that you can fall back on, you’re stuck — and that useful life lesson just comes too late.