ESPN has a new one of its “30 for 30″programs out.  It’s called Believeland, and it’s about (gulp) professional sports in Cleveland.

Russell and I were talking about it the other day, and he asked if I had watched it.  And I had — at least, the very first part.  But when we got to The Drive, and I knew that The Fumble would be close behind, and then I would have to re-live the Indians’ World Series losses and Michael Jordan’s shot to beat the Cavs and the Browns leaving to go to Baltimore, I switched it off.  It was just too painful to watch all of that crap, again.  Living through it once and feeling like you have been not only utterly forsaken, but also the object of affirmative torture by the sports gods, was more than enough. 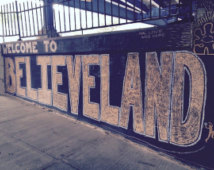 I was kind of embarrassed to admit this to Russell, who also is a Cleveland sports fan.  But Dads who are sports fans have to be honest with their kids about it.  There’s good in being a sports fan, but there’s also a lot of pain and angst and feeling like an idiot because you care so much about a team that you can’t sleep when they lose a big game and sometimes you admit in candor that a bad loss will not only wreck your day, but also wreck your month or even your year, and that there are some bad things that happened — like those mentioned in the preceding paragraph — that will haunt you for the rest of your days until you go toes up.

Interestingly, Russell said he enjoyed the program, because he hadn’t lived through it, and he felt it gave him an understanding of Cleveland and its beleaguered fans that he just hadn’t had before.  It was educational, rather than painful.  And maybe that’s the right way to look at it.  Maybe, until that glorious day in 2137 when a Cleveland team finally wins another world championship, every Dad or Mom who indoctrinates his child into the brotherhood of Cleveland sports fanship should sit that child down in front of the TV, make them watch Believeland, and then ask the crucial question:

Are you sure you’re ready for this?