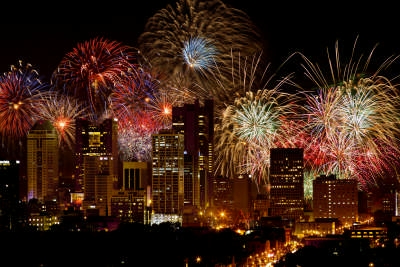 Tonight is the annual Red, White and Boom fireworks show in Columbus.  It’s always held on the Friday before Independence Day, and it’s a great celebration of pyrotechnics and loud noises that draws hundreds of thousands of people to downtown Columbus to ooh and aah about the latest bursting shell.

It’s also kind of a pain in the ass.

The problem is that people come to downtown not just to watch the show, but to camp out and get well lubricated hours before the show even begins.  So, the green space gets occupied by blankets and people working on their 12-ounce curl techniques in the early afternoon hours.  By the time the show starts, some of the observers are so liquored up they don’t know if they’re actually seeing fireworks or seeing stars from the drunken tumble that caused them to crack their heads on their neighbor’s cooler.  Add to that the heavy traffic that comes into the downtown area, causing mass tie-ups, and the debris left by the hordes, and its not a pretty picture.