As Russell, Kish, UJ, and I enjoyed watching the Indians take two games from the Oakland Athletics on Saturday and Sunday — and look pretty darned good in the process — the Tribe’s front office was busy, too.  With the major league trade deadline nearing, management was hoping to make some deals to fill a few holes on the roster. 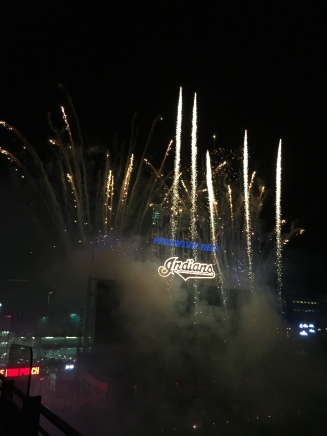 The Indians pulled off a key trade with the Yankees, sending some of their stable of minor league prospects to New York in exchange for prized reliever Andrew Miller.  Miller, a lefty, is a strikeout specialist who will give Tribe manager Terry Francona better options in the bullpen.  (And, of particular importance in the modern world of baseball economics, Miller has a favorable contract, too.)  The Tribe also tried to acquire catcher Jonathan Lucroy from Milwaukee, in exchange for still more prospects, but Lucroy vetoed the deal, invoking no-trade rights he’s got in his contract.

As we drove back from yesterday’s 8-0 shellacking of the As, UJ and I listened to Cleveland sports talk radio.  Some callers bemoaned the Indians’ decision to deal some of their top prospects, but others recognized reality:  in professional baseball, if the stars align and you find yourself in a position to make a legitimate run for a pennant, you’ve got to make the moves that maximize your chances for success, now.  You can’t make long-term plans because injuries and contracts and free agency just make that impossible.  Instead, it’s all about striking while the iron is hot and hoping that you put the pieces together that allow you to bring home a championship.  (And, while nobody wants to give away prospects, experienced fans know that guys who look like lock-cinch phenoms at the A and AA levels often don’t pan out, anyway.)

This year the Indians have fine starting pitching, their defense is greatly improved, and their offense is far more productive than most people expected.  And while they’ve got some holes, at catcher and third base, they’ve got a legitimate shot at the playoffs — and one you make the playoffs, who knows?  I’m glad to see that the Tribe’s front office is wheeling and dealing to try to maximize the Indian’s chances to make a successful run this year.  The final trade deadline comes today, at 4 p.m.  Don’t be surprised if the Indians make another swap before then.