The other day Kish and I watched Dirty Harry, the 1971 thriller starring Clint Eastwood as Harry Callahan, the .44 magnum-toting cop who eschews political correctness, believes in using maximum force in bringing down criminals, and doesn’t care a bit about breaking the rules to do so. 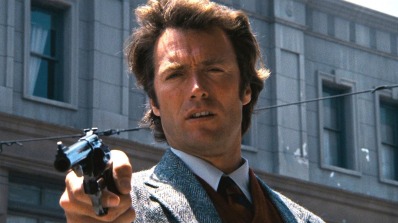 The movie still holds up well, 45 years later.  In many ways, it’s superior to the current Hollywood product, because it doesn’t rely solely on car crashes and shoot-outs to sustain the plot and pace.  There’s a suspense element to it, from the initial scene where the Scorpio killer uses a long-range rifle to shoot and kill a woman on a rooftop swimming pool, to the later scenes where Scorpio tries to carry out his threats to kill others in order to be paid a ransom, to Harry’s long jog around San Francisco to reach different phone booths so he can deliver a ransom before a young girl hostage is killed.  And while Harry obviously is the best cop around, the rest of the police force and the mayor aren’t ridiculous caricatures or light comedic foils — which is standard fare in later cop movies — but competent people who obviously are trying to do their best to deal with a crazed killer.

The writing is good, too.  We all know the famous scene where Harry has a shoot-out with bank robbers while eating a hot dog that ends with him asking a wounded robber who is considering going for his gun “well, punk, do you feel lucky?”  But there are other pieces of crackling dialogue, too, such as the scene where Harry rescues a potential suicide standing on a window ledge by making him so mad that he physically attacks Harry, or the interaction between Scorpio and the guy he pays to beat him up and make his claim of police brutality by Callahan more plausible.

One of the more interesting elements of the film, considered against the ensuing 45 years of action movies that followed it, is that it doesn’t try to answer all of the viewer’s questions.  Sure, he’s probably called Dirty Harry because he does all of the dirty work in the department, but it just might be because he’s got a bit of peeping Tom in him, too. There are no flashback scenes to show us exactly how Harry got the way he is, and no effort to give Scorpio a back story or explain why he has decided to kill random strangers.  He’s just a disturbed lunatic, presented matter-of-factly as an unfortunate reality of modern life.

The fact that some key points are left for the viewer to wonder about is refreshing.  You can imagine people leaving a theater after watching Dirty Harry and actually talking about some of these issues, and others.  How many modern action films that you’ve seen in the past few years could you say that about?