The talk about Hillary Clinton’s health episode has knocked Libertarian candidate Gary Johnson and his interview gaffe off the front pages.  He must be grateful for that.

If you’ve seen the footage of Johnson’s interview last week on MSNBC, you know it was a painful moment.  Johnson is asked what he would do about Aleppo, and he stares blankly at the interviewer and then asks “And what is Aleppo?”  The interviewer says, “you’re kidding,” and then explains that Aleppo is in Syria.  Of course, for years Aleppo has been a focus of the ongoing fighting in that war-torn country. 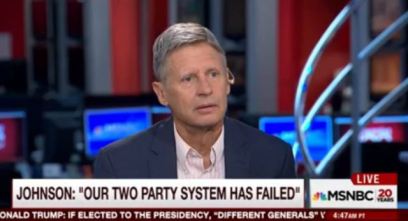 The footage is tough to watch, because you can almost see Johnson’s brain desperately spinning and trying to come up with an answer — but he can’t call up anything.  Johnson later explained that, at the moment, his mind was stuck on thinking that “Aleppo” was an acronym for something — he just couldn’t remember what.  After getting some air time on a national network, being asked questions that indicate he is being taken seriously as a viable candidate, and having a chance to reach voters who might actually consider voting for a third party in this unfortunate presidential contest, sheepishly asking “And what is Aleppo?” must have been as embarrassing as it gets for a politician.

It’s tough for the third party candidates in America.  It’s rare for them to be taken seriously, and rarer still for them to have any kind of impact on the race, because as Election Day nears and the reality of the polls sinks in, their supporters start wondering if they are wasting their votes.  For that reason, the margin of error for third party candidates is awfully small.  Whereas the major party candidates can survive a number of blunders — as Donald Trump’s amazingly resilient poll numbers indicate — when a bad gaffe like Gary Johnson’s Aleppo moment happens to a third-party candidate, it can be enough to quash their chances forever.

I’ve heard more people talking about the Libertarian candidate and the Green Party candidate this year than ever before, and some polls were showing Johnson was reaching the high single digits — putting him within striking distance of a showing sufficient to give him a podium at a presidential debate, which is the Holy Grail for third-party candidates.  Johnson says his “Aleppo day” might actually end up working in his favor, by increasing his name recognition and raising awareness of his candidacy.

Perhaps . . . but experience teaches it was more likely the death knell, and the moment when Johnson became the butt of a future Saturday Night Live skit.  As Johnson sat their under the TV lights, desperately struggling to think of what Aleppo was, he may have crossed the line into irrelevancy.