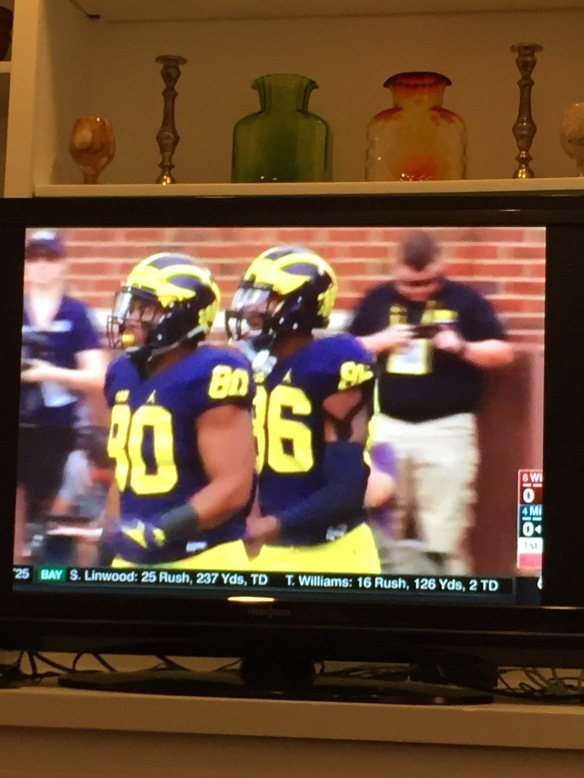 I love these Saturdays.

The air has turned cooler.  I worked this morning, then walked home in time to catch the speedy and talented Buckeyes’ beat down of hapless Rutgers.  So my team has won, the day is still young, I have cold beer in the refrigerator, and there is some good college football yet so be played.

So I’ll drink a cold beer and scout the Badgers and Wolverines, both of which will square off against Ohio State in the coming weeks.  Then I’ll watch Louisville and Clemson.  And all the while I’ll do some channel surfing to catch other games, and scores, and maybe dip into the Tribe game now and then.

Last night we were at a musical performance that was played in the round.  We sat in one corner of the room and, because of the configuration of the venue, we could see people on the other side of the room facing the performers — one of whom was a guy who was obviously falling asleep.

I suppose he might claim that he was simply listening intently to the music, with his eyes closed, but that would be an obvious post hoc rationalization.  Once you noticed him, you couldn’t help but watch the progression.  First his eyelids started drooping, then they would shut completely.  His chin kept dropping to his chest.  From time to time, when the music would stop between numbers or the singer would hit a particularly high note, his eyes would open slightly and he would feebly stir, realize he had nodded off again, and try to do something to stay awake without drawing too much attention to himself, like taking a drink of water or adjusting his seating in his chair.  For all I knew, he was pinching himself under the table or biting his own tongue to try to reverse the process.  But nothing was working.  This guy was going to sleep in that chair for so long as the music was being played.

I felt sorry for the guy.  I’m guessing that pretty much everyone has had one of those moments when you are out in public and, because of a hectic day or a bad night’s sleep the night before or the combination of soothing music, a good meal, and a comfortable chair, you feel yourself slipping into the hazy world of sweet slumber.  Often when it happens you’re helpless, and all of your attempts to stave off the inevitable are doomed to failure.  When I feel that coming on, the only thing that works is to get up and walk around vigorously — but of course that’s not an option when you are at a musical performance.

When you’re at the gateway to the land of nod at the end of a long day, there’s not much you can do.  You’re going to succumb, and the only thing you can hope for is that the person out in public with you makes sure that you don’t start openly snoring . . . or use your predicament to take a picture of you sawing logs that goes viral on the internet.