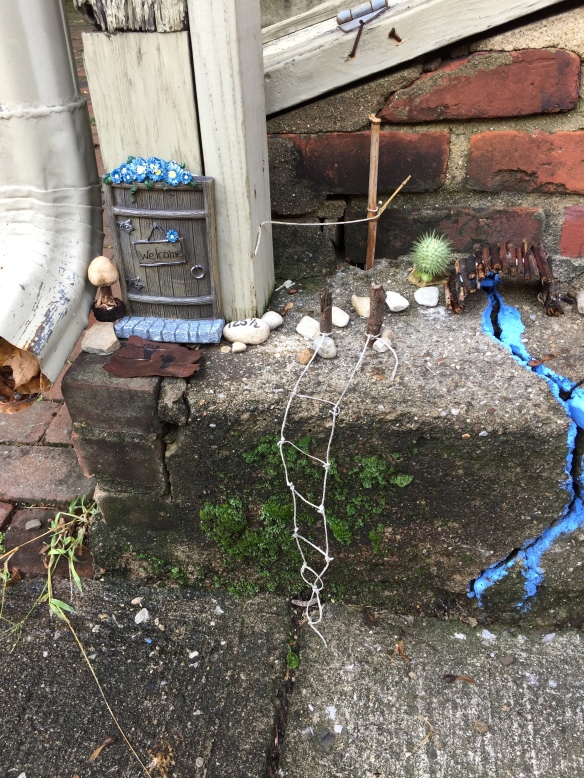 The elf and sprite population of German Village apparently has been busy.  We’ve found yet another tiny door on the streets of the Village — this one located next to a drainpipe and complete with a brook, a bridge, a clothesline, and a ladder so that our elfin friends can climb up to the front door.

As the fairy tale of the cobbler teaches, our vertically challenged buddies are very industrious fellows.  What’s next — an elfin high-rise?

Kish and I have watched the first two episodes of Designated Survivor, the new ABC drama.  Starring Kiefer Sutherland, it tells the story of a Secretary of the Department of Housing and Urban Affairs who is named the “designated survivor” for a State of the Union address.  He doesn’t go to the speech so that, in the case of some massive attack on the Capitol, he is protected and can become the new President. 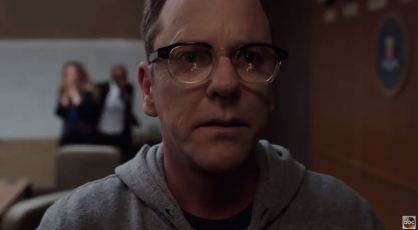 Of course, that’s exactly what happens.  The Capitol building is blown up, the President and Vice President, the rest of the Cabinet, the Supreme Court, and all of the members of Congress except for one congressional “designated survivor” are killed.  The stunned Secretary of HUD, who was on the brink of being fired, has to take over the reins of a shocked government where governors and angry generals are immediately ready to throw him overboard and go their own way.  We don’t know yet who launched the attack, or why.  And, of course, foreign governments express their official condolences but are immediately trying to take advantage of the disarray in the U.S. government.

It’s a well-made show, and it’s good to see the Kiefer Sutherland whisper back on TV, but I have to say Designated Survivor is tough to watch.  Given the current awful presidential election and the kind of splintering effect it seems to be having in our society — coupled with protests and riots over police shootings, random terror attacks, and trouble everywhere we look overseas, among other issues — I really don’t need to see a realistic depiction of the Capitol dome blasted in half and FBI agents carting body bags from the rubble of what used to be the U.S. House of Representatives.  And if, as I suspect, we’re going to learn that the explosions weren’t the work of foreign terrorists at all, but rather some kind of domestic plot, it’s just going to make things worse.

TV has long had its apocalyptic shows, where ordinary people have to deal with zombies, aliens, and death-dealing viruses.  But a realistic show about an attack that wipes out most of the U.S. government and exposes the deep divisions lurking just beneath the surface hits a little bit too close to home these days.

C’mon, TV producers!  Give us a break.  We’re feeling a little fragile here!