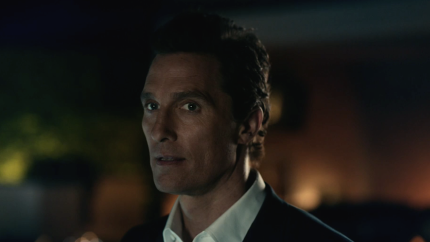 In one of the commercials, Matthew McConaughey gets spruced up, puts on an expensive suit on a dark night, smiles a slight, enigmatic smile, and then falls backward into a pristine pool.  In the other, a prissy, entitled Brit talks about how some people are always able to dodge all of the rules — hey buddy, in this American presidential campaign that hits a little too close to home! — and then visits wheelchair-bound Steven Hawking in his underground Bond villain lair where they talk about the laws of gravity, time, and space.

Curiously, these are car commercials.  McConaughey is peddling Lincoln, and Hawking and his above-of-all friend are hawking (pun intended) Jaguars (which I’d always thought was pronounced Jag-warr, but I now learn from the commercial is pronounced, with an affected British accent, Jag-u-are).  In contrast, say, to the commercials that purportedly astonish slack-jawed “real people” with the sheer number of awards Chevrolet has won in the last two years, the Lincoln and Jaguar ads don’t really tell you anything about the advertised vehicles or even show them very much.  The Lincoln and Jaguar ads are lifestyle ads — the kind that try to convince the credulous that if they just buy the product they’ll get the advertised lifestyle, too.

Okay, I get it.  But I’ve still got a question:  how many people out there really want to be like McConaughey or the Brit who trades witticisms with Hawking in his futuristic bunker?  I guess Lincoln and Jaguar aren’t looking to sell cars to women, for example.  And I doubt that the lifestyles depicted appeal to a huge chunk of the American male population, either.  I, for one, have never aspired to fall backward into a pool while zen-like music plays.  And as much as I admire Steven Hawking’s colossal intellect, I don’t exactly associate him with cars.

Give me the car commercials that feature brightly painted roadsters rolling down a winding, open road on a bright sunny day, whisking through freshly fallen leaves as they round a curve.  Leave the enigmatic smiles and the falling into pools to the erectile dysfunction crowd, will you?