Chuck Berry turned 90 this week.  Perhaps fittingly, one of rock and roll’s few surviving pioneers will be releasing an album of new songs next year. 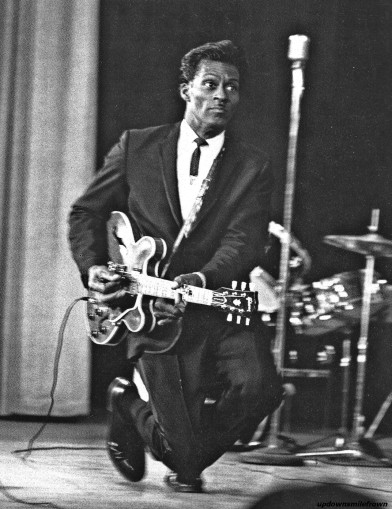 Many people helped American music take an abrupt turn in the early ’50s, from the big band/crooner/torch singer sound to the chaotic rhythms of rock and roll, but Chuck Berry was foremost among them.  Berry helped to define the genre in two key ways — in writing about fast cars, music, and girls, and in producing a guitar-focused sound that made everyone want to move their feet and strum the air.  More than 60 years later, the riffs he produced on Maybelline and Johnny B. Goode remain some of the greatest ever recorded.  And Berry’s showmanship on stage, including his trademark duck walk, helped to define what live rock music should be, too.

When Elvis Presley died almost 40 years ago, I was working for the Ohio State Lantern, which ran a headline referring to Presley, as many did, as the King of Rock and Roll.  Our faculty advisor, Tom Wilson, emerged from his office to vigorously object to that headline, because he thought that title could only be given to Chuck Berry.  Some people in the newsroom argued with Mr. Wilson, but not me.  He was absolutely right.  And Berry’s recordings remain as fresh and catchy today, and as ready to convert a young person to the world of rock and roll, as they were when they first hit the disk jockeys’ turntables so long ago.

One other thing:  it’s nice to be able to write about a music legend who has lived to a ripe old age.  Rock music takes its toll, and many of its best have been felled by drug overdoses, plane crashes, or violent death.  Chuck Berry duck-walked right on past all of that, with his wife of 68 years, Themetta, there beside him.  Two of their children are part of the band that has recorded the new album, too.