This afternoon I’m going to watch the Cleveland Browns play the Cincinnati Bengals.

That’s right.  I’m going to voluntarily subject myself to more than three hours of bad football, bad karma, and general haplessness.  I’m going to watch a truly wretched 0-12 team play a horribly underperforming 4-7-1 team in a game that is utterly meaningless, even to their own beleaguered fans. 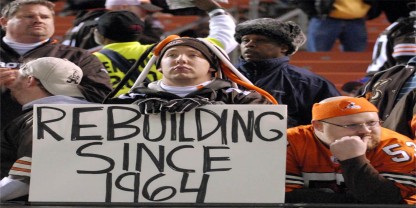 Why am I doing this?  Well, for one thing I’m a Cleveland Browns fan.  It’s tough duty generally, and an especially awful burden this year — but I’ve consciously avoided watching most of the games until now.  At this point, it’s so obvious that the Browns suck that I have no expectations whatsoever of success.  The Browns are likely to lose every game this year; the only question is whether they will find new ways to suffer a self-inflicted disaster.

So why watch this game, when I’ve avoided the others?  Because the Bengals have had, if anything, an even worse season than the Browns.  Sure, they’ve won games, but everyone expected them to be a Super Bowl contender, and instead they’ve laid a colossal egg.  If the Browns have any hope of winning a game this season, it’s going to be a game like this, where their opponent also reeks and a few lucky breaks might actually produce a W.  And if that were to happen — something I’m not counting on, mind you — it would be sweet that it would be the Bengals who bore the shame of being the only team to lose to the Browns this year.

I’m a glutton for punishment.

We got our first snowfall last night.  Its appearance moved me to compose this bit of doggerel about snow, and its impact on some of my fellow Ohioans:

The First Snow Of The Season

It’s bright outside and what’s the reason?

We’ve had our first snow of the season

We’ve seen a flake or two before

But today we got a whole lot more

So now the ground is oh so white

And the gelid air has a special bite

The cold and snow make a special code

Telling snowbirds they should hit the road

Farewell for now, my thin-blooded friends