Should people who have peanut allergies be permitted to pre-board airplanes, along with the folks in wheelchairs?

That’s the subject of a complaint filed last week with the Department of Transportation by Food Allergy Research and Education (“FARE”), a group that advocates on behalf of people with food-borne allergies.  It alleges that American Airlines is breaking the law and discriminating against those who have adverse physical reactions when exposed to peanuts by not accommodating them and allowing them to pre-board with others. 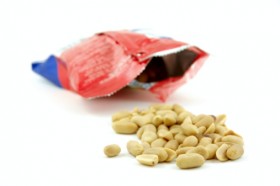 For its part, American Airlines — which doesn’t serve those little bags of peanuts to its passengers, incidentally — notes that it limits pre-boarding to people with physical disabilities that require them to get assistance in making it down the jet bridge and into their seats.  AA states that its planes are cleaned regularly, but the cleaning efforts, and for that matter the air filtration systems on the planes, are not designed to remove all traces of nut allergens. The airline states that it cannot establish “nut-free zones” on its planes, and it does not prevent other passengers from bringing nuts on board.

FARE contends that people with peanut allergies, and those who are traveling with them, should be permitted to pre-board so they can wipe down the seats, armrests, and trays, or even cover them.  It notes that, unlike American Airlines, Delta allows peanut allergy sufferers to pre-board upon request.

It’s one of those weird issues that seem to crop up more and more in the modern world.  There’s no doubt that people who have peanut allergies can have severe reactions when exposed, up to and including going into anaphylactic shock.  At the same time, it doesn’t seem like people with peanut allergies really need pre-boarding to the same extent that, for example, people in wheelchairs do.  People with peanut allergies don’t require physical assistance, and even if they need to wipe down their seats, there seems to be no reason why that can’t be done when they board with everyone else, as part of the settling-in process that inevitably occurs when people board planes.

If people with peanut allergies can pre-board, doesn’t that open up pre-boarding to people with other conditions who could plausibly claim they should be accommodated, too?  People with fear of crowds, for example, could argue that they shouldn’t be required to wait in the packed-in throng on the jet bridge, which could provoke an anxiety attack.  And peanut allergy pre-boarding seems to open the door to potential abuse, because airlines have no way of knowing whether someone who claims to have an allergy really does.  Speaking as someone who has seen fellow travelers push the envelope on carry-on items and in jostling for early boarding, I’m guessing that if FARE prevails on its complaint we’re going to see a huge spike in claimed peanut allergies.