When I first heard there was a “goat yoga” fad, I thought it probably involved yoga fiends doing poses that were . . . goat-like.  Just like, for example, yoga features the classic “downward facing dog” pose, or the camel pose, or the cat pose.

Perhaps goat yoga involves poses that involve standing on all fours, or shaking your head and twitching your ears, or eating a tin can, or making the goatish maaaaa sound? 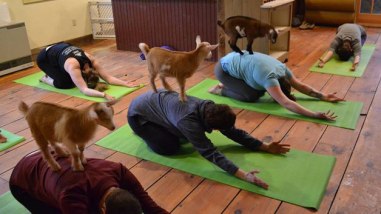 But all of that is wrong.  “Goat yoga” evidently just involves doing yoga poses while goats are in the vicinity and — this is apparently especially important — having your picture taken in a yoga pose with the goat teetering on your back, or otherwise visible somewhere, so you can post the picture on your favorite social media outlet.  This story about goat yoga classes in Dallas notes that, for $36 bucks a pop, participants can get in an hour of yoga while more than a dozen goats from a nearby farm wander around, looking photogenic and selfie-friendly so those crucial snapshots can be taken.  Having been around goats at the petting zoo long ago, I’m guessing goats aren’t part of the mix because they emit a zen-inducing fragrance that is especially conducive to ekagra.  In fact, you’d think that having animals roaming around and potentially nibbling at your clothes while you’re working on getting that pose right might interfere with achieving the state of mind that yoga is supposed to help participants attain.

Why do yoga fans like doing their poses with goats, as opposed to sheep or some other moderately sized farm animal?  For that matter, why an animal at all, as opposed to, say, “cabbage head” yoga, or “abandoned sofa” yoga?  Apparently it’s just because people think goats are cute and look good in the inevitable social media selfies.  And they’re willing to part with 36 bucks for the privilege.

This says something about modern society, but I’m not sure what.