Donna Brazile, the long-time Democratic operative who took over as the chair of the Democratic National Committee during the 2016 presidential campaign, has published a tell-all book.  It’s the kind of political book that is described as “explosive,” because Brazile dishes the dirt on the likes of Hillary Clinton, the Clinton campaign, President Obama, and other topics that titillate the inside-the-Beltway crowd.  You can read the Washington Post article about the book and some of its revelations here. 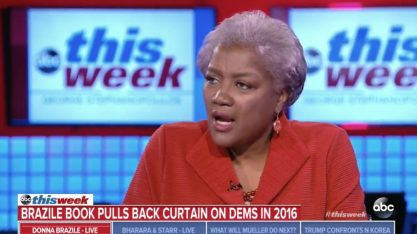 For example, Brazile now says that she was so concerned about Hillary Clinton’s health after Clinton’s fainting spell at the 9/11 ceremony that she actually considered exercising her ability as party chair to try to throw Clinton aside as the Democratic nominee and replace her with the ticket of Joe Biden and New Jersey Senator Cory Booker.  Brazile says the Clinton campaign had no energy, disrespected her and the DNC, and didn’t allow the DNC to participate in get-out-the-vote efforts; she also recounts an incident in which she told Clinton campaign operatives that they were treating her like a “slave.”  She says that the fix was in on the primary battle between Clinton and Bernie Sanders due to a joint fundraising agreement between Clinton and the DNC that effectively gave the Clinton campaign control over finance, strategy, and staff decisions, providing it with an advantage over other candidates.

I read about Brazile’s disclosures in the Washington Post article linked above, and I wonder:  why do these political operatives always seem to wait until after everything is settled before speaking up?  Who knows whether, for example, providing information during the primaries so that the news media could report on the joint fundraising agreement might have made a difference in the result?  And when Brazile took over the DNC, why not immediately publicly expose the culture of corruption and financial mismanagement that she describes in her book?  But the D.C. operatives never seem to do that, do they?  Instead, they smile and give speeches and toe the party line during the campaigns, regurgitating the canned talking points on the Sunday morning public affairs shows and hoping for a good result so that they can be appointed to some plum position by the new President — but then when the results are bad, they write a tell-all book and make a hefty personal profit spilling the beans.

It’s not exactly principled behavior, is it?  Of course, this is the same Donna Brazile who, when she was a paid contributor to CNN, gave the Clinton campaign a heads-up on potential topics and questions that might be asked at a CNN town hall, so maybe she really didn’t care all that much about the Clinton campaign getting an unfair advantage.  And in any case, since when should we expect principled action from the gaggle of toadies and sycophants that seem to make up the vast majority of the political class in both the Democratic and Republican parties in this country?