Yesterday about three thousand people attended a parade in Cleveland on one of the coldest days of the year.  The parade was to commemorate the Cleveland Browns’ 0-16 season — only the second time in NFL history that a team has accomplished that dubious record. 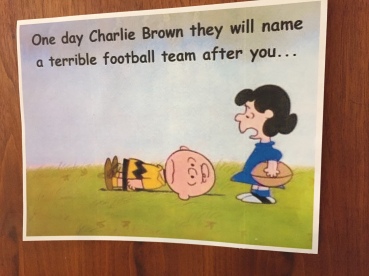 The Browns’ players and, no doubt, the team’s inept management were embarrassed by the parade.  One player, Emmanuel Ogbah, tweeted:  “That parade is a joke don’t call yourself a true browns fan if you go to that thing! Going 0-16 was embarrassing enough as a player. That is like adding fuel to the fire and it is completely wrong!”  Other players argued that the parade might discourage NFL free agents, or draftees, from wanting to play for the Browns, and that the team shouldn’t want to be known for going 1-31 over the past two seasons.

I can’t imagine what it would be like to play for a team that loses every game, and often found inventive and absurd ways to do so, so I’m sympathetic to the players.  But does having a tongue-in-cheek parade really send a bad message, and does it really discourage players who might be considering the Browns more than, say, the 0-16 season itself, and the obvious disarray in the front office and on the field, and the fact that the head coach for next year has to win 31 consecutive games to even reach a .500 record with the team?  Or does the parade, instead, send the message that notwithstanding years of futility and a horrible product on the field, there is still a solid core of Cleveland Browns backers who will freeze their butts off to try to send a demonstrable message that they still support the team and hope that this awful season marks a turning point?

I’ll be honest — I’ve been a Browns fan for as long as I can remember, but the years of failure and egregious ineptitude have caused me first to lose passion, and then to lose interest.  I tip my cap to those rugged and dedicated fans who still care enough to make a public demonstration of their commitment to the team on a frigid day.  If NFL players won’t come to Cleveland because of a parade, I think that says something about the character of the players, not the quality of the dedicated fans.