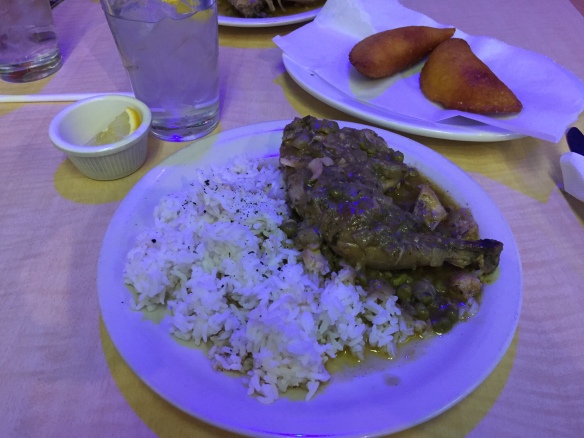 Yesterday Dr. Science and I visited Andes Bar & Grill, one of the very newest restaurants in downtown Columbus. It’s located on Fourth Street, next to the YWCA, in a spot previously occupied by Hae-Paul’s Korean-American eatery.

Andes offers home-cooked meals of Bolivian comfort food.  At our waitress’ suggestion, Dr. Science and I both went for the chicken and rice plate, and we also split some empanadas.  The chicken was a good-sized leg and thigh that had been slow-cooked.  It was awesomely juicy and tender, making it easy to use knife and fork to extricate every last ounce of succulent meat off the bone.  The chicken was served in a kind of rich gravy, and I gladly mixed the meat and gravy with the rice, added a few dashes from a bottle of Cholula hot sauce on the table, and went at it.  The empanadas also were quite good, crisp and crunchy on the outside and moist and hot on the inside.  Dr. Science, recalling his days handling test tubes and Bunsen burners, deftly used his empanada as a kind of fence to allow his fork to retrieve every last grain of rice.

The chicken was served at a mild spice level, and after we finished our food the friendly proprietor came by to ask how we liked the food and to clear our plates.  When he saw that we had both cleaned our plates and left only a few well-picked bones behind, he beamed.  He also happens to be the cook, and we asked about the available options if you’re looking for a little additional kick with your meal.  He said that traditionally Bolivian food is served at a very mild spice level, and people can then tailor the heat of their dish to their specific taste by adding sauces that are served separately.  He said that Andes has two homemade sauces that you can use for that purpose, one that is at a moderate spice level and one that goes in, all guns blazing.

The chance to eat that home-cooked food with a fiery sauce will definitely cause me to spring on the back of my llama and head back to the Andes.