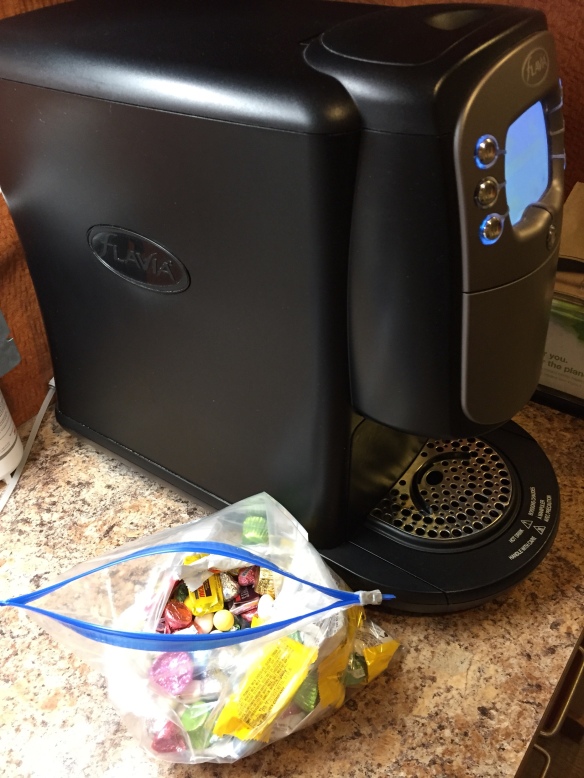 Yesterday, when I went back for my second office cup of coffee in the morning , I saw that a large ziplock bag of Easter candy had appeared by the brewing machine. It had been left there by someone who wanted to spread a little chocolate cheer, or by someone who couldn’t resist the bag’s contents and just had to get the temptation out of the house and onto more neutral ground — or perhaps both.

The bag appeared to have an impressive amount of high-quality Easter goodies, like those coated malted milk eggs, foil-wrapped chocolate eggs, peanut butter-filled eggs, small chocolate bunnies, and chocolate bars — but no Peeps. Sherlock Holmes would presumably conclude that, with such an array of Easter candy, the absence of a traditional Easter basket element like Peeps meant either that the Candy Leaver hated Peeps, and didn’t include them in their Easter candy purchases in the first place, or gobbled down every last Peep in a mad frenzy, perhaps during their drive into work that morning, before the bag appeared at the coffee station on our floor.

The big drawback of being a coffee drinker at our office is the fact that the coffee machine is the goodie deposit area. Occasionally cookies or leftover birthday cake will appear unexpectedly, but the days after Christmas, Valentine’s Day, and Easter, when everyone seems to just want to get leftover candy out of the house, are the worst from a temptation standpoint. Yesterday I resisted, and saw the contents of the bag steadily decline until it had been thoroughly pawed over and only a few orphan pieces remained. Once more, the helpful and ever-hungry workers on the fifth floor had done their duty and helped a colleague through a time of crisis.