Seattle is home to some of the largest corporations in the world, with one — Amazon — growing like crazy and fueling a boom in downtown construction.  But when Seattle politicians decided to impose a tax on large employers in the city to deal with a homelessness crisis, Amazon very publicly decided to pause work on a new downtown office building until after Seattle City Council votes on the tax. 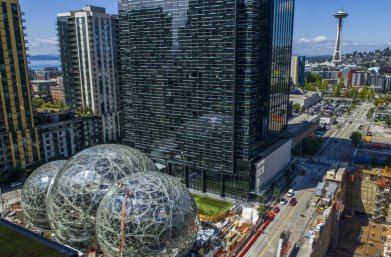 The proposed tax would have a real impact on businesses.  It would be a “head tax” of $500 per employee on approximately 500 businesses that gross at least $20 million annually in Seattle.  For Amazon, which currently has about 45,000 workers in Seattle, the tax would cost more than $20 million in 2018 and 2020, with that tab increasing when the form of the proposed tax would shift to a .7 percent payroll tax in 2021.  Even for a company that is highly profitable — Amazon recently reported quarterly income of $1.6 billion — $20 million a year isn’t chump change.

Amazon typically doesn’t mess with local politics in Seattle, so its pause in construction planning until after the City Council vote has had a real impact.   One City Council supporter of the tax accused Amazon of attempting “blackmail,” but other voices in city hall and in the real estate development community shuddered at the thought that the company might stop its investment in Seattle.  The concern is only heightened by Amazon’s announced search for a new city in which to build a second headquarters — a process that is already underway, in which Columbus and other cities have made the first cut.  Some people are concerned that Amazon might just direct its growth exclusively to the new home of “HQ2,” leaving Seattle in the dust.

Why should large employers, alone, pay a tax to address Seattle’s growing homelessness problem?  Supporters of the tax say that the large tech companies have contributed to the problem by bringing in highly paid workers who have caused a spike in home prices and rents — the median price for a house in Seattle is a whopping $820,000 — and that has contributed to the homelessness problem.  The sponsors of the tax also note that Seattle doesn’t have an income tax or tax capital gains, and claim that the city has few options to raise funds to address homelessness.  It’s curious, though, that the tax would be limited to only  large employers, as opposed to all employers, or that it doesn’t target various forms of real property transfers.  After all, a lot of people have presumably made a lot of money selling property that dramatically increased in value due to Amazon’s growth — why shouldn’t they contribute some of that profit to address the homelessness problem?

The reaction of the City Council member who characterized Amazon’s decision to pause construction as extortionate reminds me of the hubris that caused cities like Detroit to assume (wrongly) that large employers wouldn’t move away — or the story of the goose that laid the golden eggs.  As Amazon’s experience in its “HQ2” search proves, other cities would welcome a large employer that offers thousands of workers high-paying jobs.  The reality is that Seattle needs Amazon more than Amazon needs Seattle.  Does it really want to risk killing the goose?