Students often come to college with their own set of impressions about the people in the world around them, whether they’ve ever personally interacted with those people or not.  That’s not a criticism of college students, it’s a reality of modern life.  We all live in our own little worlds, and we form impressions about what others might be like based on the news that we allow to filter into our bubbles. 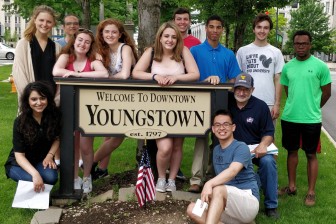 But what if people tried to get out of their bubbles and actually meet some of the people they’ve formed impressions about, to see what their lives are like and experience their worlds?  That’s what the Harvard Institute of Politics tried to accomplish with something called the Main Street Project.  The goal was to get Harvard students, most of whom hailed from the coasts, out into places in flyover country where they could meet real people who live and work in the heartland.  The group of students visited towns in western Massachusetts, New Hampshire, Pennsylvania, and Ohio, saw people working at their jobs, and went to the restaurants where the locals go.  They stayed in bed and breakfasts owned by locals, traveled in a van, and took the back roads.  In the process, they even met a few Trump voters and went to a gun range where women were engaged in some vigorous target practice.

As one of the organizers wrote:  “Even though these kids had almost all been raised in the United States, our journey sometimes felt like an anthropology course, as though they were seeing the rest of the country for the first time.”  The students admitted that they “had been fed a steady diet of stereotypes about small towns and their folk: “backwards,” “no longer useful,” “un- or under-educated,” “angry and filled with a trace of bigotry” were all phrases that came up.”  But as they traveled through places like Youngstown, Ohio, meeting good people who were living happy, productive lives, the students saw the stereotypes break apart.

None of the students got course credit or a grade for participating in the Main Street Project, but they did get an education.  One of the student organizers said:  “The best way to blow apart a stereotype is to challenge it” — and he is right.  Wouldn’t it be wonderful if everyone, regardless of their age, had a similar opportunity to meet people and challenge some of the stereotypes that we all carry around?